Canadians drive across the provinces throughout the summer months. Inter-provincial and Intra-provincial tourism are on the rise during these months—most Canadians book cabins, cottages, and campgrounds months in advance. Our family explored the cabin for the first time last summer. Shar

Every summer, our family enjoys road trips. Last summer, we didn't only want to go for a road trip, but camping as well? We decided to explore the web to book various sites. We booked some spots through the Ontario Provincial Parks website and some directly through Airbnb. Families run privates camping sites in different parts of Ontario; we had absolutely no idea about it until now. We had some equipment from the past and purchased some new ones. Luckily, we found a nice campground near Kingston near thousand Island and a beer we booked through Airbnb. It'sIt's called Happy Green Acres Campground in Mallorytown.

Thousand Island is around 345 km from our house. Initially, I was a bit reluctant to see that you know why we are going that far to a trailer park. I don't know what we're going to do, but my husband booked a cabin this time. The cabin seemed exciting, so this was our second camping trip in July, and we were not putting up a tent. We were kind of happy that we were going to experience staying in the cabin. We didn't have to carry our tent or the mattresses, but the owner had advised us to bring our bedsheets, blankets, and pillows, and also, obviously, we needed some cooking supplies. We brought our stove, got one with propane, and got cooking pots and the groceries. We made a list before we traveled, and we decided to explore new places.
As we sat in the car, I was still thinking about what we would do near Thousand Island; we were not planning a boat tour this time. The area is famous for Thousand Islands and the boat tour that we had done in the past. We stayed for two nights. I checked on the way how far that was from Montreal, Quebec, and Ottawa. I remember the last time we traveled to Thousand Islands, we did the boat tour, and after that, we drove directly to Montreal. I saw that Ottawa was only an hour and fifteen minutes drive from that place, and even Montreal was about two hours and thirty minutes. We decided to go to Ottawa, not Montreal, for a day trip. 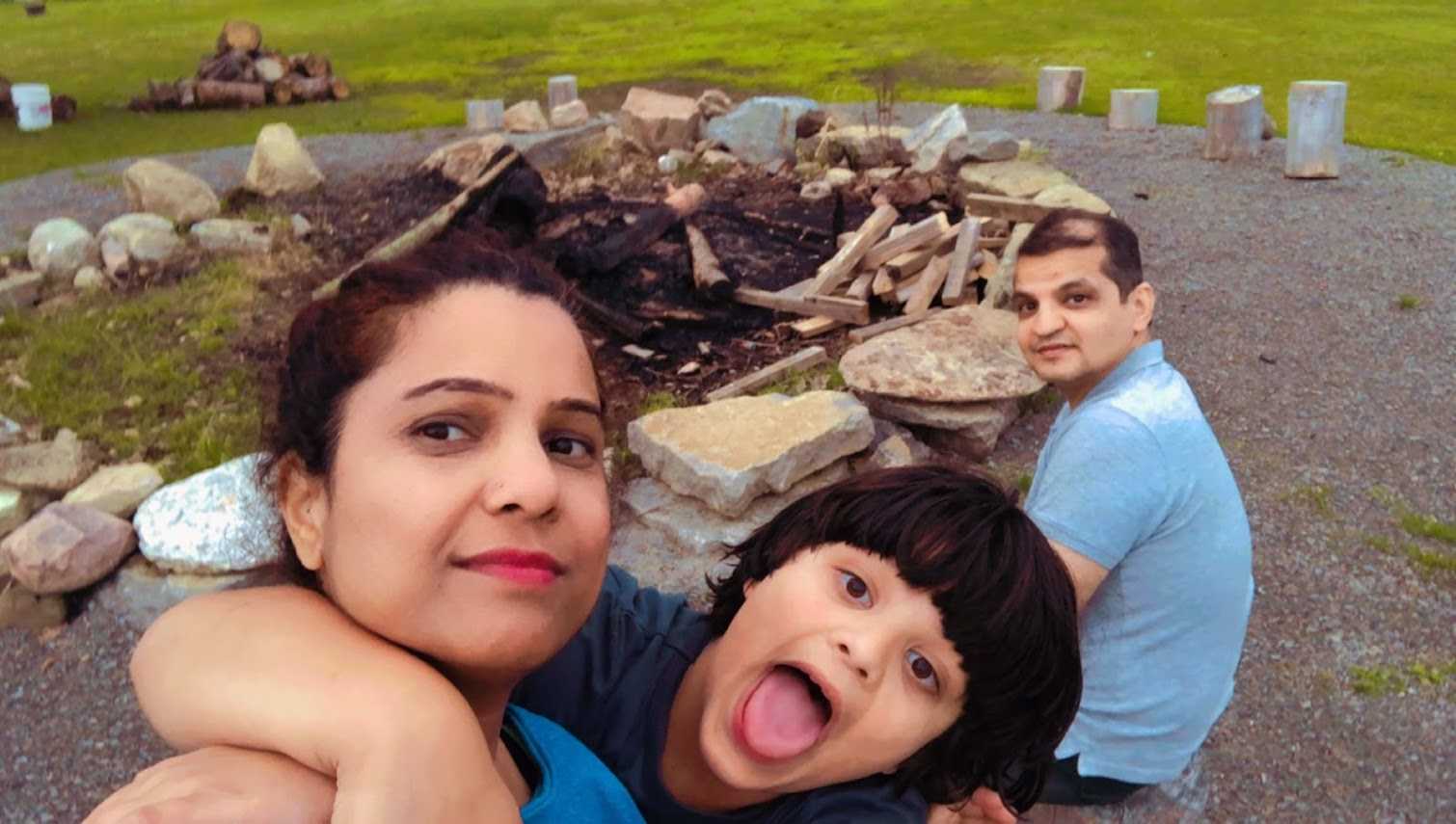 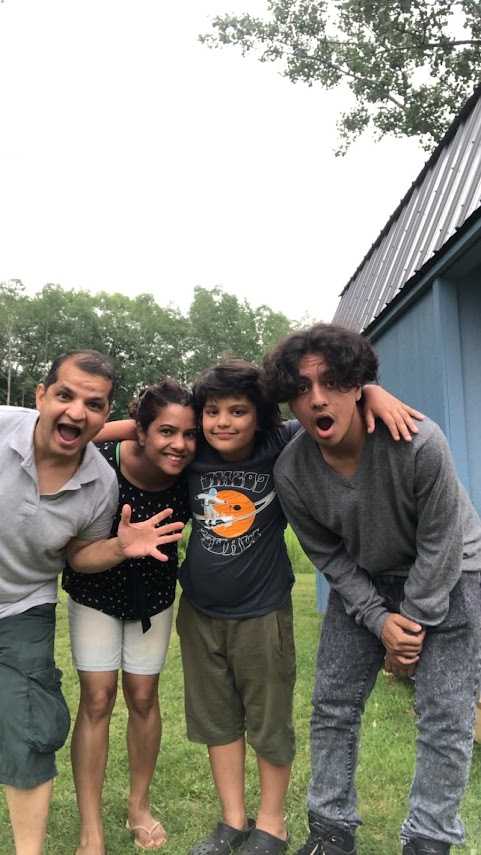 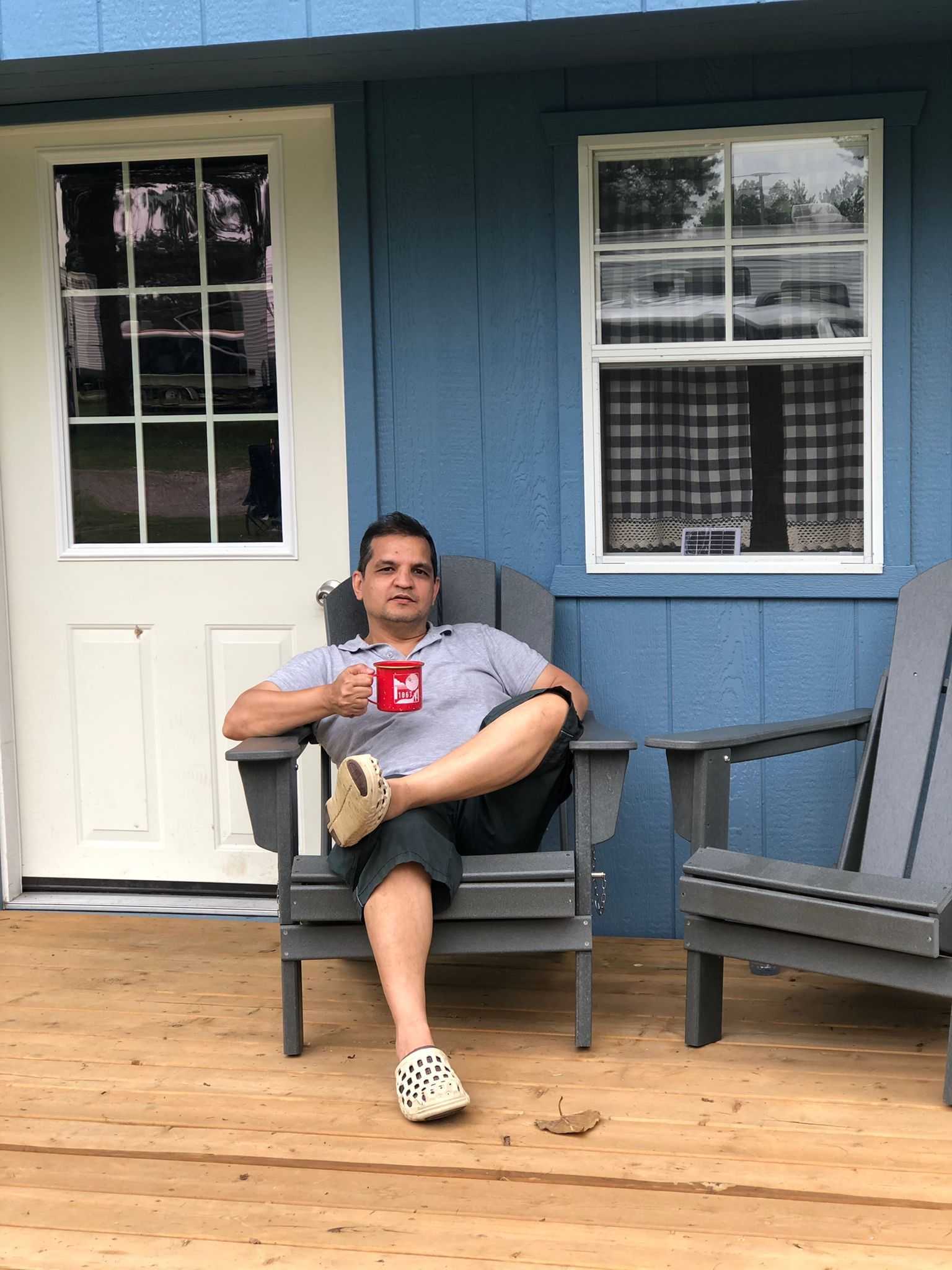 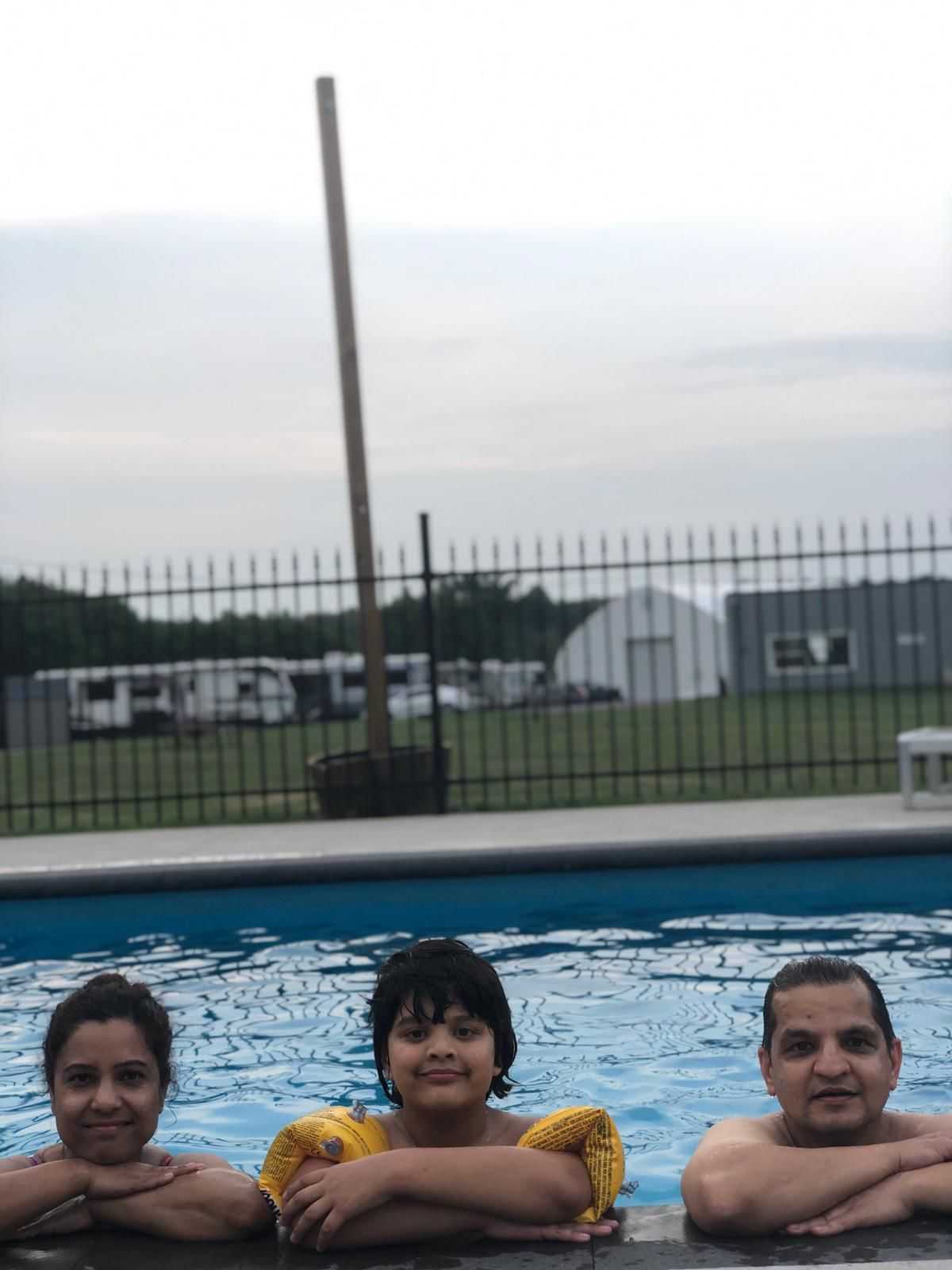 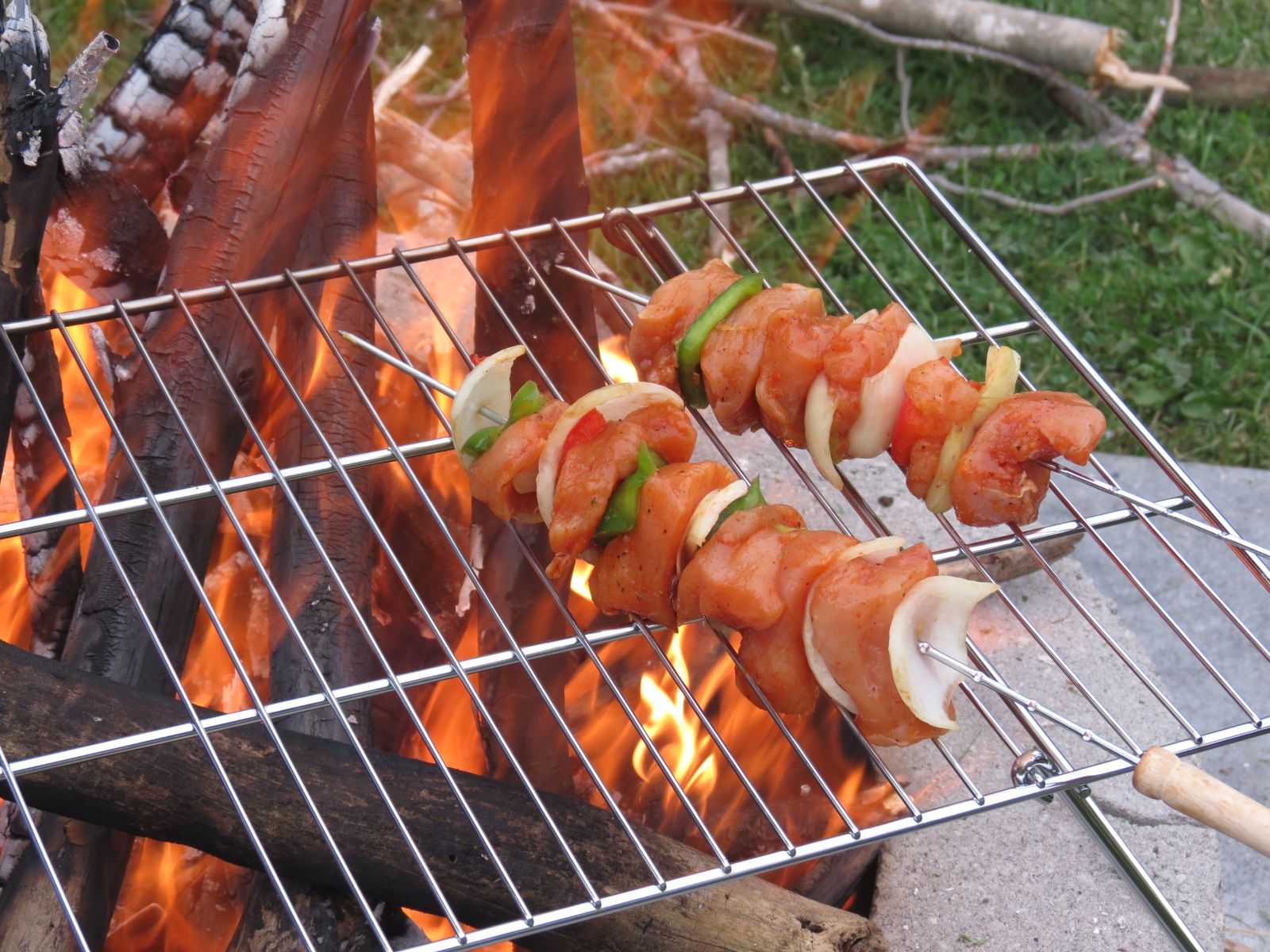 So we entered the campground about 2 o'clock; our cabin wasn't big there were only four cabins in the area, the rest of them were trailers. Some of them were permanently parked by previous campers, some of them might be rented as well. There was a swimming pool accessible to everybody staying in the campground, but you do need to reserve it in advance for 30 minutes. There is a large community campfire that takes place during the weekends. There is an ample event space, and many events happen during the weekends, including Friday, Saturday, and Sunday, but we were there on Wednesday and Thursday, so we missed that event. I saw so many senior couples staying there in the trailers. One old couple had a tent next to us with the dog, and it was pretty enticing to see them enjoying.
We got the fire started together, we bought one pack of firewood, and then the camper from one of the trailers close to us brought us more. They offered us to get more from them whenever needed. The best part was that it was fantastic to be with the family; the campfire was exciting for us. My little one, my youngest son, and my husband decided to explore the area to collect more firewood from the fallen trees. We copied it from tent neighbors who were doing the same, and then it was competition, but we were learning. I remember somebody just walked by us and said, I like your firepit; you should win a prize for that.

I remember three ladies around in the 70s were renting the third cabin from us. I really liked the vibes; you know they were sitting outside with a fire on, enjoying their drinks, chatting, and laughing. I was dreaming about doing the same with my girlfriends when I grew up to that age. It looked really lovely, and the other campers were also thrilled; they were enjoying and chatting. I was happy to be there, we went to the swim for a little bit and enjoyed the pool. We wished we were there for the event as well, but we missed that part.
The next-door camper staying next to our cabin wasn't seen; we thought it was empty. We have two boys, and they could be noisy at times. One thing I noticed was that there were no kids in the area. They were all seniors or adults; there were no kids. At least near us, so we were the only ones with the children. The following day when we woke up around 5:45 am to go to the washroom. The boys woke up too, and the cabin next to us was too close, the voices reached the neighbor, and they just screamed at us to shut up. So that was it, we decided to take our car and explore the area around. I found out there was Thousand Island National Park just 10 minutes drive. There is an entrance fee to enter the park. I will book it for the next year for the camping trip; I realized it happens through Parks Canada https://www.pc.gc.ca/en and not with Ontario Provincial Park https://www.ontarioparks.com/en.

It was early in the morning they were only two people working at the job. Fishing is something we've never tried, but my husband and my little one wanted to try fishing, so we got a little fishing net, some chairs, and the picnic supplies with us. I had recently started practicing yoga, so I decided to calm my mind on the yoga mat. The view was breathtaking. I wish the sky were clear and there were no clouds. After a while, we had breakfast in a picnic area overlooking the lake and the islands. The park is beautiful; the geese, the ducks, and the cool breeze in the month of July were appalling. After staying there for a few hours, we came back to the cabin.

As we planned to go to Ottawa, we quickly got ready. The bathrooms at the Happy Place Campground are nice and clean. Lucky for us, we were next to it, so we could use it even in the dark in the night. Ottawa was, as I said, only one hour and fifteen minutes drive. In Ottawa, there is not much to do except Parliament Hill and the area around that. We roamed around, took some photos, enjoyed lunch in the restaurant, and then walked around Rideau Lake. We've been to Ottawa many times before. You could visit inside Parliament Hill, there are no entry fees, but you need to stand in the line to reserve it. You can experience the Change of the Guards ceremony in the morning, a replica of one in England. The light and laser show at night is mesmerizing too. We had covered all of that in the past, and this time it was about refreshing the memories. The buildings around Parliament hill are ancient and classic.

We only stayed there for a few hours and came back to enjoy some barbeque at the campsite. The campers next to us had left, and new ones had checked in. The new campers looked fun; they had a beer machine/ and you know, they decorated the cabin with streamers as soon as they checked in. It felt like there was a party happening next door, with loud music. They had the beer going, refilling the mug as it ran out. I saw them joining other groups with the other campers. They were literally having fun, and I wish that we could be doing the same thing, but we were with the kids; our fun was a different kind.

The best part for us was sitting around the fireplace, having smores, and chatting until midnight. Kids are growing up fast, they hardly sit around with us to share their hearts, especially the teenagers. That night, we spoke about everything, laughing and creating new memories. I will always talk about planning trips with friends but doing it with the family was too much fun.

We enjoyed our time at the campground. There is community barbeque, community fireplace, and a lot of events take place on the weekend. I would definitely suggest going there on the weekend instead of the weekdays. Although, bookings on the weekdays in more manageable than on the weekends. You might have to book it well in advance as it fills up fast. The family that owns the place is good. They were accessible whenever we had any question we could ask them, and they replied very fast to all our queries. The town is nearby so you can the supplies if required. Thousand Island Cruises is in close vicinity,if you have not done that before, go ahead and do it. It's a great experience. Thousand Island Provincial Park is around 7 km; the drive to Montreal, Quebec, and Ottawa is short. I would definitely recommend this place, and we had so much fun. It's secured in my memory box for eternity. I hope you enjoy this blog and write to me if you would like to ask any questions. I'll be happy to help; thank you. Here is the link to Happy Green Acres Campground, https://happygreenacres.com/