Life in a Nursing Home- Lighting Up Allendale

Allendale is a long-term care home that offers 200 beds, operated by Halton Region. Seniors are the most vulnerable during the pandemic, they haven't been able to embrace their children and grandchildren for the past nine months due to the high risk.

In the year 2020, we have confronted the unanticipated, while we tried to hide behind the masks, some of us won't be able to make it to the end of the year. I was in Allendale last Saturday, our son participated in the live music concert organized by his music school. Allendale is a long-term care home that offers 200 beds, operated by Halton Region. Seniors are the most vulnerable during the pandemic, they haven't been able to embrace their children and grandchildren for the past nine months due to the high risk. Allendale faced multiple outbreaks since the pandemic started and is currently on lockdown, seniors are not allowed to have any visitors. It's been hard for the families during the holiday season.

Residents are not supposed to mingle yet there was a sense of excitement, they were thrilled to see what was happening around in the courtyard. As I walked in, I found a gentleman looking out of the window. Our eyes met, we both smiled, and we waved to each other. He looked happy to see people passing by.

I'm so proud to be in a thriving community like Milton. One of the inhabitant's significant others contacted the network to carry a few changes to raise happiness to the friends and family at Allendale. Our community started a mission to light up Allendale to cheer the residents during this Christmas season. As soon as the news broke out, many turned to help with lights, cords, switchboards, inflatables, ornaments, and other Christmas decorations. The melancholy and misery in the Allendale yard transformed into Christmas in abundance in practically no time. People also organized a parade with private embellished vehicles to light up the evening. It was a frigid night; a blend of downpour and snow was pouring from the sky. To everyone's surprise, Santa also made an appearance. The event was streamed live on the social media channels and only singers and musicians with a few family members were allowed on the site with their masks on. The trees looked beautiful with multicolored lights, Inflatables and Christmas decor had really turned the place around. Santa was strolling around the courtyard; he was peeking by the windows to wave to the seniors. The Personal support workers who were inside with the residents caught Santa's attention and pointed him to the residents. I caught the sight of a few people glancing from the second-floor windows. 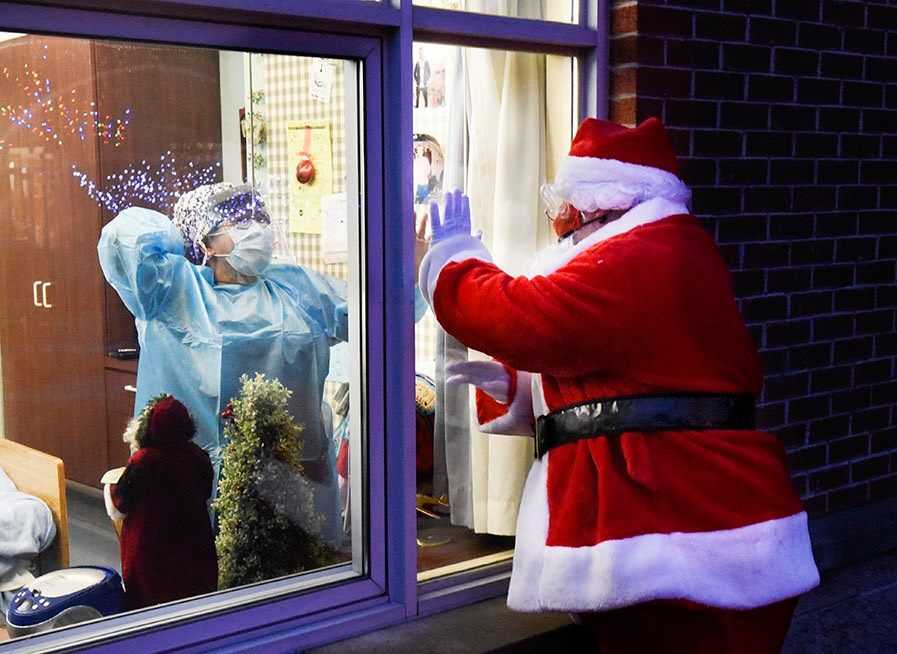 I noticed a room on the ground floor where I saw a nurse dressed in protective clothing. She was wearing a shield to cover her face; however, her smile was visible through the shield across the courtyard to the place where I was standing. She waved back at Santa and informed the resident about his arrival. I wasn't able to see the face behind the wall. I thought to look through the window somewhat later to check how is it to be on the opposite side of the glass? I was on edge to see the individual behind the wall. As I looked, I saw an elderly lying on the bed with his bed lifted for supper. I saw the meal served on the table while he was in awe. He was holding his face with the right hand and appeared to be completely lost. The tray in front of him had a plate and 2 cups, most likely with water and tea or coffee yet his hand was still on his face, his eyes settled in one place as he was feeling nostalgic.

I moved back to the stage to enjoy music again and began hitting the floor with my son. As we shook a leg, we may have made a couple of strides nearer to that equivalent window where I discovered him similarly situated, holding his face, and gazing at something. I don't have the foggiest idea whether he ate his dinner that evening, I discovered him lost in musings. That same afternoon, my husband was helping my son in making a gingerbread house. We attempted it for the first time, we weren't fruitful yet had heaps of fun making it. At the point when I saw the individual, I was thinking back my afternoon and pictured how my child and spouse were sharing a chuckle. That refined man should have likewise adored Christmas, he probably went through days purchasing and decorating the exteriors of his home, he must have baked cookies together with his family. He must be remembering his small young children, screaming their heads loud for the Christmas presents, he probably made some intense memories pondering how he could fulfill the needs and keep everybody cheerful. He must be remembering that Sunday when they all planned to visit a nearby farm new smell coursing through the whole house or they may have decided to purchase a white Christmas tree with blue adornments the next year. He must be visiting the memory lanes of adventures of carrying bliss to the youthful babies moving through elementary schoolers to snobby teenagers, any longer yet compose a considerable rundown of important costly stuff. He must be harking back at that first Christmas his teenage daughter brought her boyfriend home or when his young son visited home with his new sweetheart. The light that lit up his face when he held another infant as a granddad should be in his recollections now. He should have some blame, some pride, and a few wrongs that he could've done right around then.

He must be taking a trip down his childhood, his bond with his folks and kin. His first Christmas after the wedding thus significantly more. I don't have a clue what kept him in that state, I looked one final time before we left the premises to check whether he was alright, however, he was still in that equivalent position. Water went through my eyes and I didn't care for what I saw however I was unable to transform anything for him Life is a full circle, we arrive in this world, have kids, and age, everybody experiences various circumstances and conditions, yet everybody winds up there. A few people are blessed to be with the family at that age and some are isolated. At the point when we're brought into the world, our folks are there for us, assisting with every achievement except they arrive at that age when they need care and love, we are with them. I wish we could be there for them taking care of them through their sickness and sad days too.

Looking at the spouse's point of view breaks my heart, nobody can feel the anguish of the other half who has gone through every day for such countless years together, and afterward, pandemics dominated and their life partner must be conceded in view of the threats of the infection. The heartache can't be portrayed by anybody. The helplessness of children who spent every other Christmas with their parents and are now unable to reach out to their vulnerable parents. My uncle was in palliative care a few months ago and I remember how hard it was for us to see him there. My heart goes out to all these families and I pray to God and wish that they are able to bring their loved ones back home and be together once again!

While walking to the car, I spoke to my son and explained what I had experienced, my voice couldn't support my story and he saw my eyes getting wet again. He had perceived something else from the same situation and mentioned, he would like to live in this kind of facility when he grows old. Everybody accompanies an alternate impression of something very similar, I saw one side and he saw another. I don't know what I would choose for myself at that point in time, but one thing is for sure I wouldn't want any regrets when I look back at my life. To the gentleman, I saw the other day, I wish you a very happy and healthy life ahead and hope you get to meet your loved ones soon. Amen!