My eyes just shined, it’s the mountains that I love the most and there was a perk, sunflower fields on both the sides followed us for a very long time, just like we had seen in the movie, “Zindagi Na Milegi Dobara”.

Day-3, Driving through the mountains in Spain; Hey there, I am back with another story, Im not sure if you are following our journey. Here, I continue about Day-3 in Spain.

Even after getting very tired in exploring Madrid, we couldnt sleep until past midnight, jet lag had totally taken over. It was just the early morning hours we fell asleep. At first, we thought its 4 am lets leave for the journey but I shut my hubby and told him to rest as he had to drive for the whole day. Well, we slept until after 8 oclock and then started getting ready. We had packed the luggage from the night before and we kept our clothes out for the day, just had quick showers and had a light breakfast, and then hit the road around 9:30 am. We also left one of our big suitcases in the hotel apartment in Madrid as we had so much luggage. 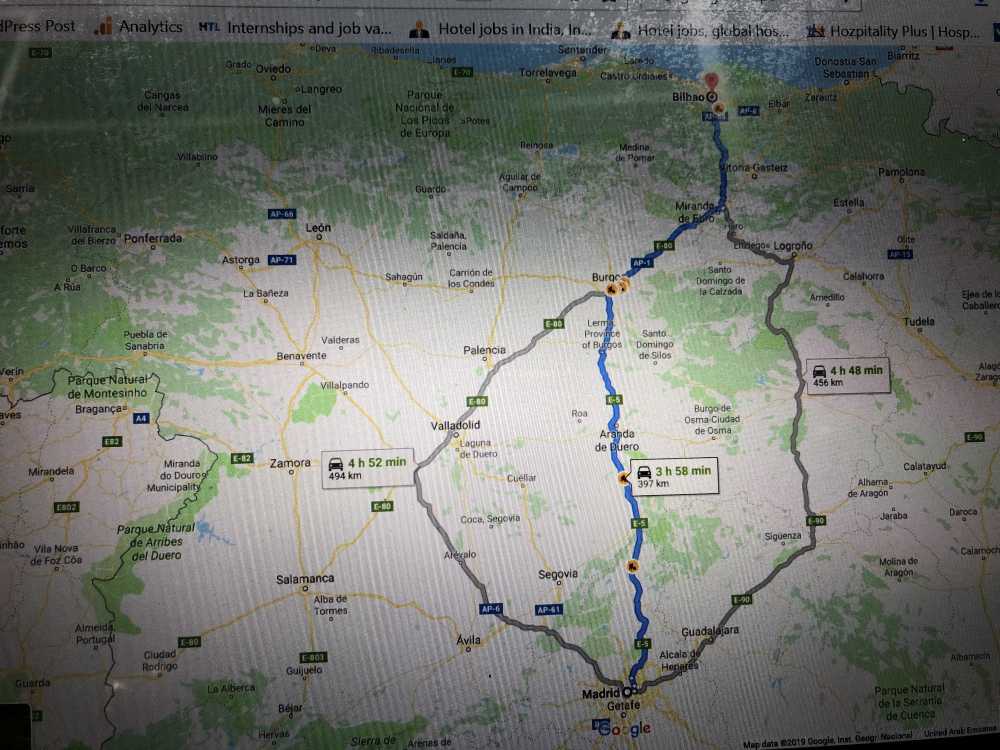 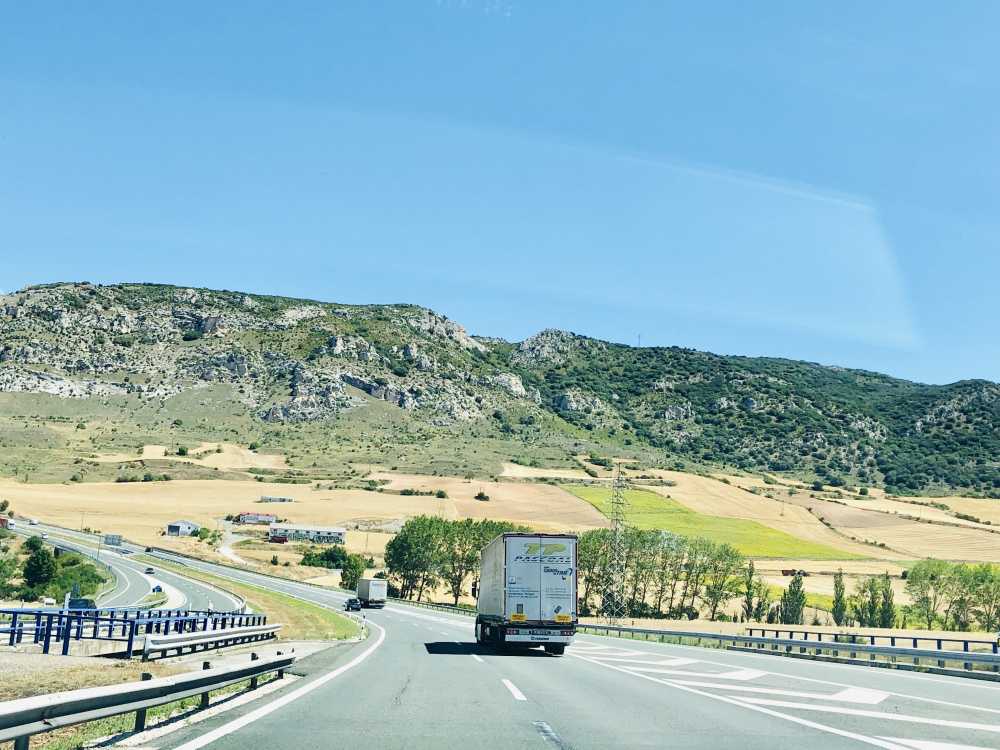 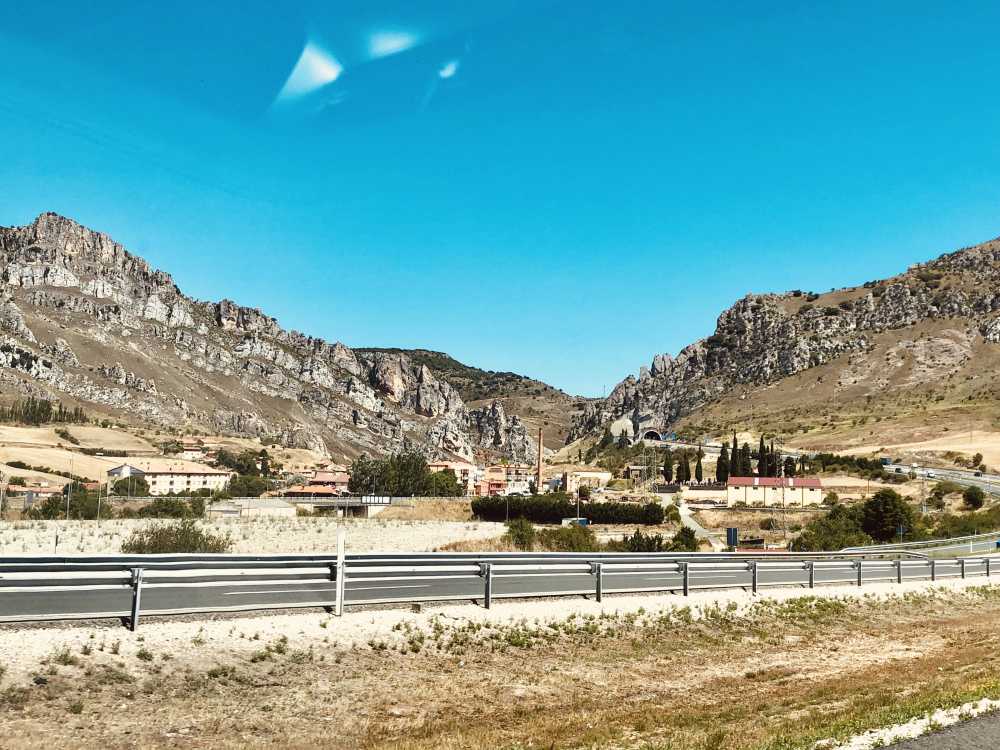 GPS could be really tricky at times due to road changes and if you missed one turn you have to go all around; we took a while to hit the main highway but there we were. After a few minutes of driving on the main highway towards Bilbao, we could see the mountains. My eyes just shined, its the mountains that I love the most and there was a perk, sunflower fields on both the sides followed us for a very long time, just like we had seen in the movie, Zindagi Na Milegi Dobara. I was happy we changed the route to a very scenic one.

Around mid-afternoon, we stopped somewhere for coffee, what a nice place it was! Most of the Spanish people do not speak English. We were surprised to see young people struggling to communicate with us. We thought they wouldve learned English, at least for the tourists but thats how it is there. That guy must be around 18-20 years and only spoke Spanish but it was just coffee, we understood each other. 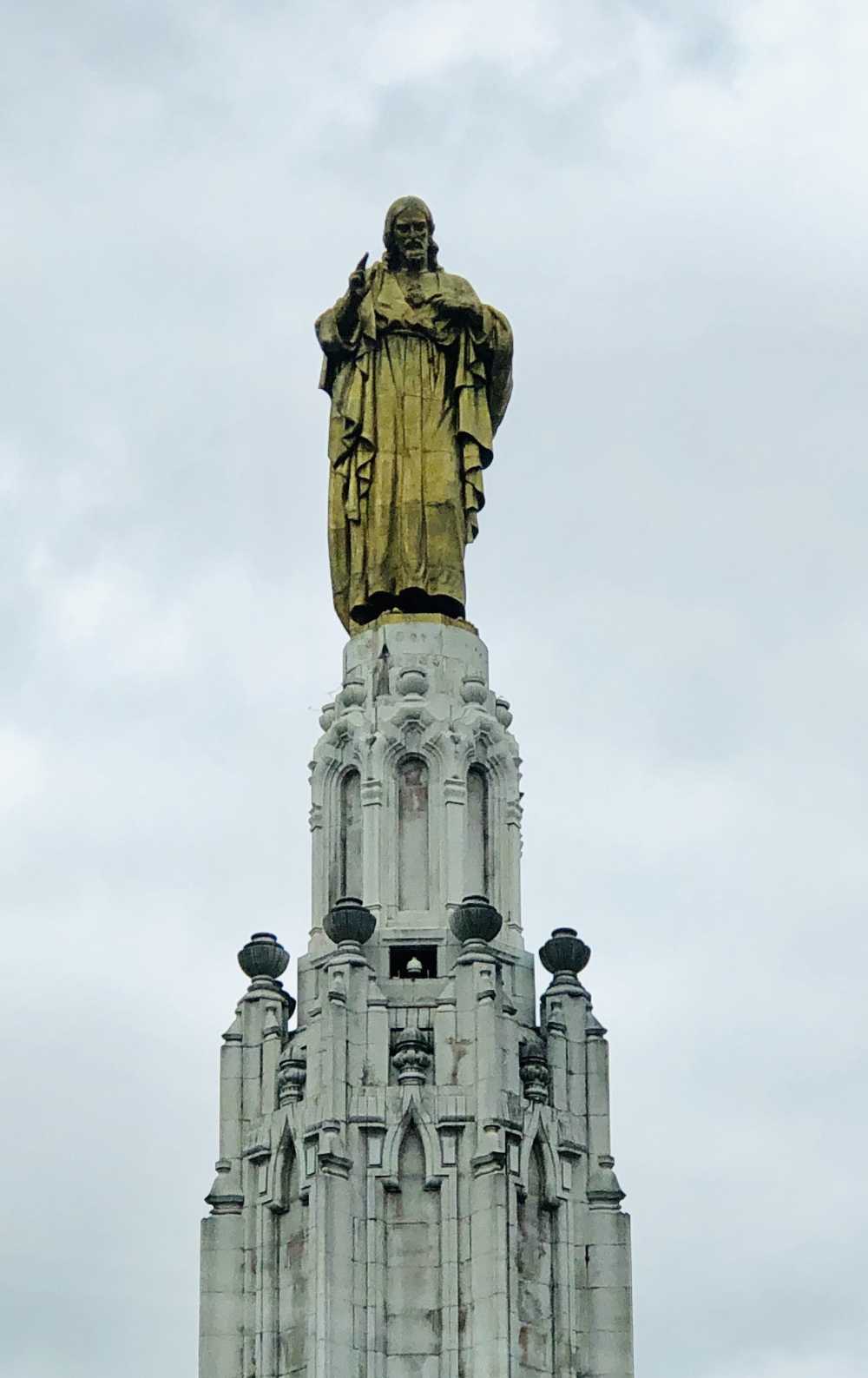 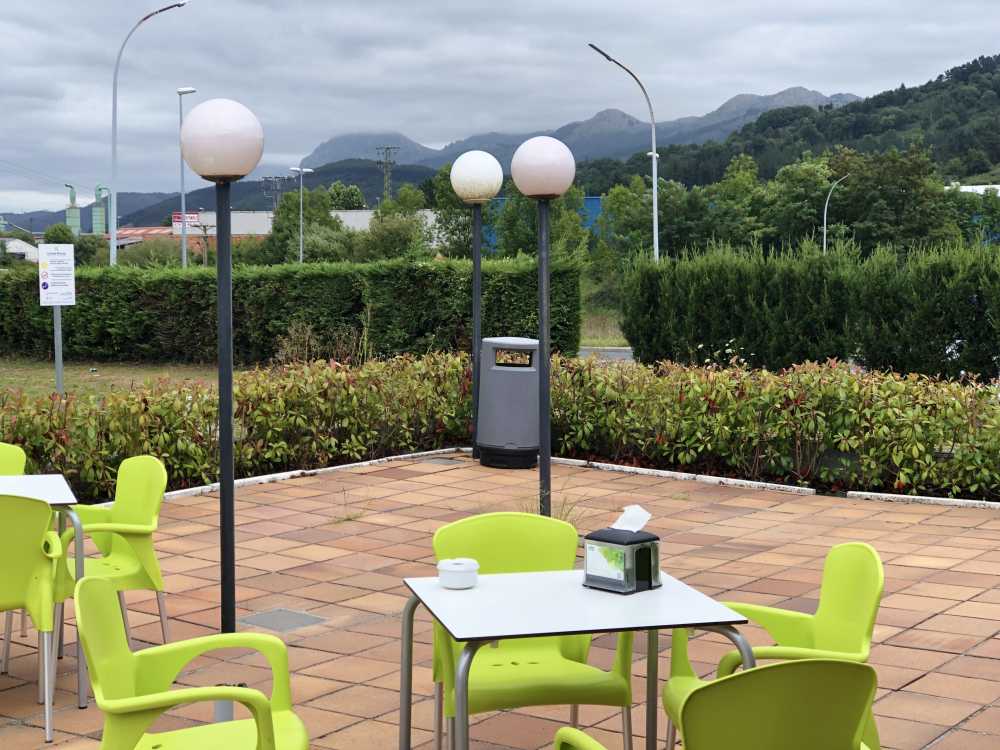 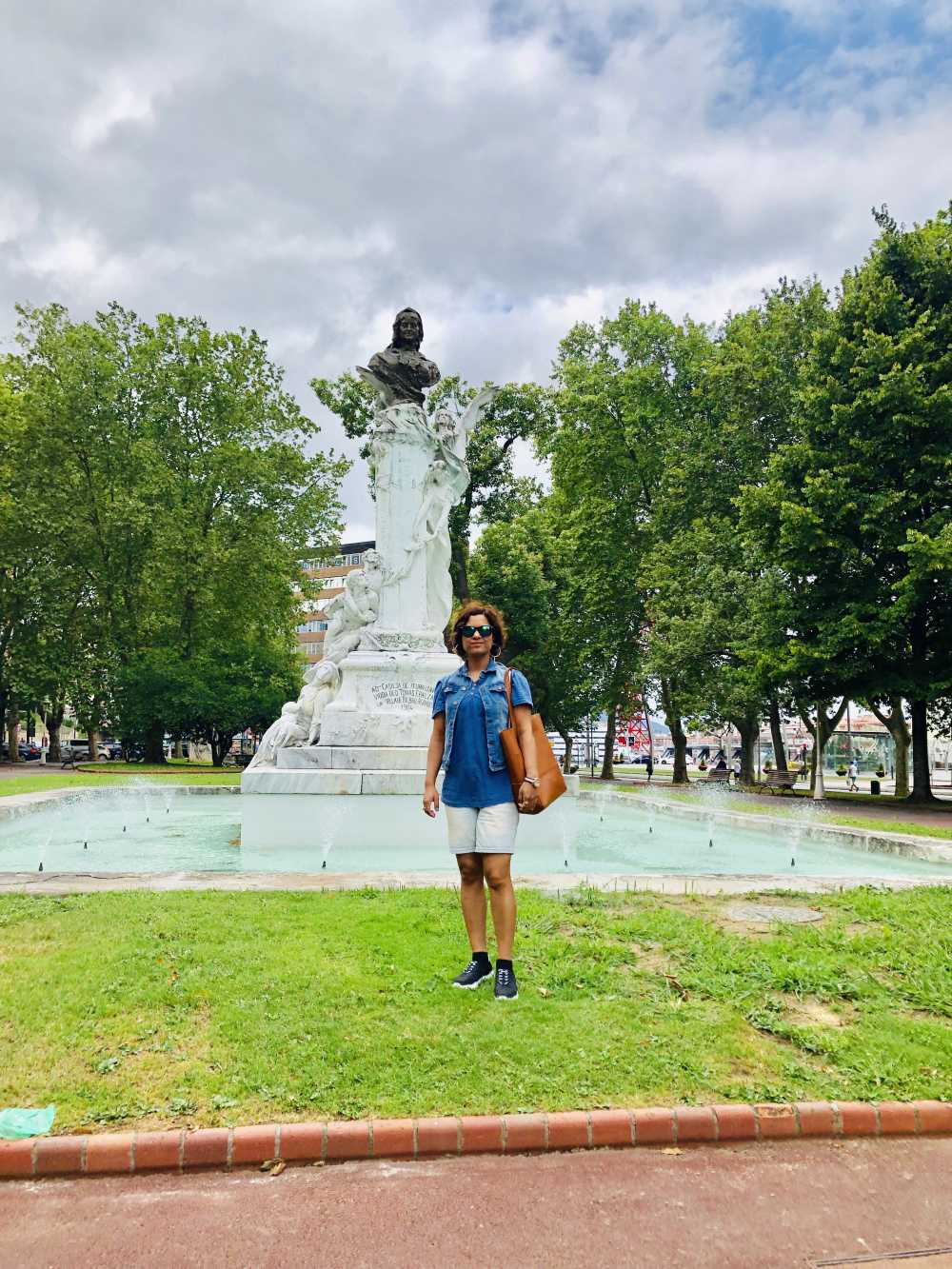 The distance between Madrid and Bilbao is 397 km through toll roads. Bilbao, an industrial port city in Northern Spain, is surrounded by green mountains. Its the de facto capital of Basque Country, with a skyscraper-filled downtown. As we continued, the mountain changed from rugged and filled up with dense forests. The whole drive was through the mountains, we reached Bilbao around lunchtime, parked the car and walked a little bit, and left for another destination, San Sebastien. By the time we left the scenic Bilbao, the grey clouds had already started covering the sky. The scene of clouds touching the top of the mountain was such mesmerizing.

Now, the next destination was only 101 km from Bilbao through green mountains, cloudy skies, and beautiful landscapes. San Sebastian is an exotic coastal city and my favorite in entire Spain. If I knew, I wouldve booked a stay in San Sebastian after Madrid, this was a mistake as we were the first-timers. You should definitely keep one night for San Sebastien. The place has been shot in various Hollywood movies including James Bond. The city is divided by the creek, historical buildings add value to it and speak about the culture. Its also famous for various food options. We loved walking around Mount Igueldo for a different perspective of La Concha. The city views and island views from here were spectacular. I seriously didnt want to leave San Sebastian and was actually very sad. 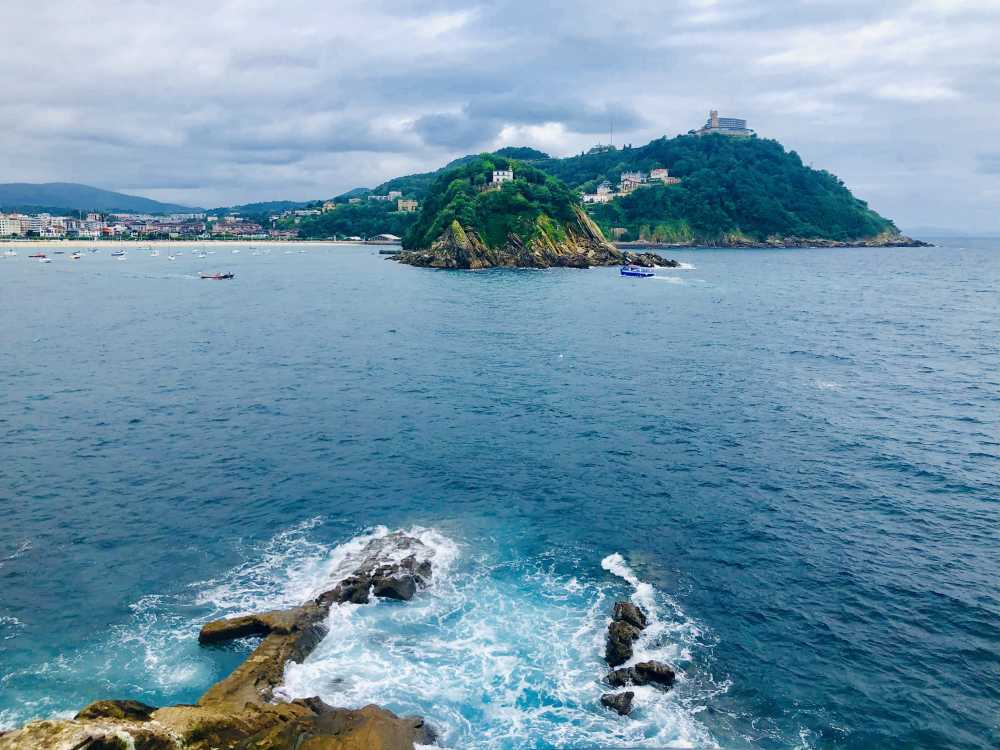 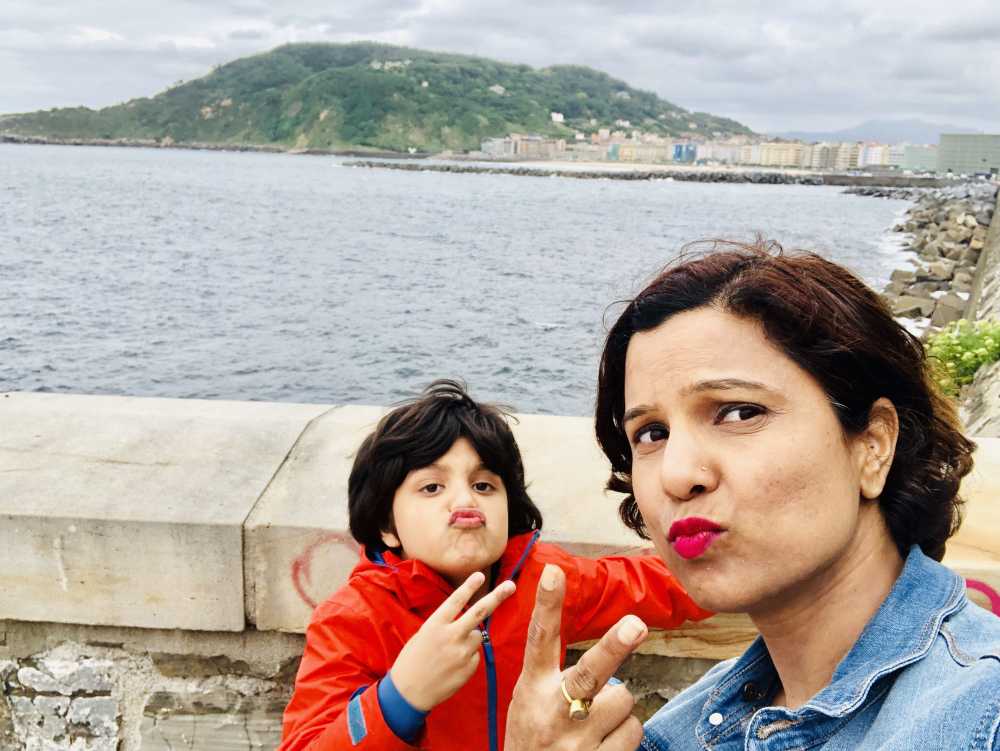 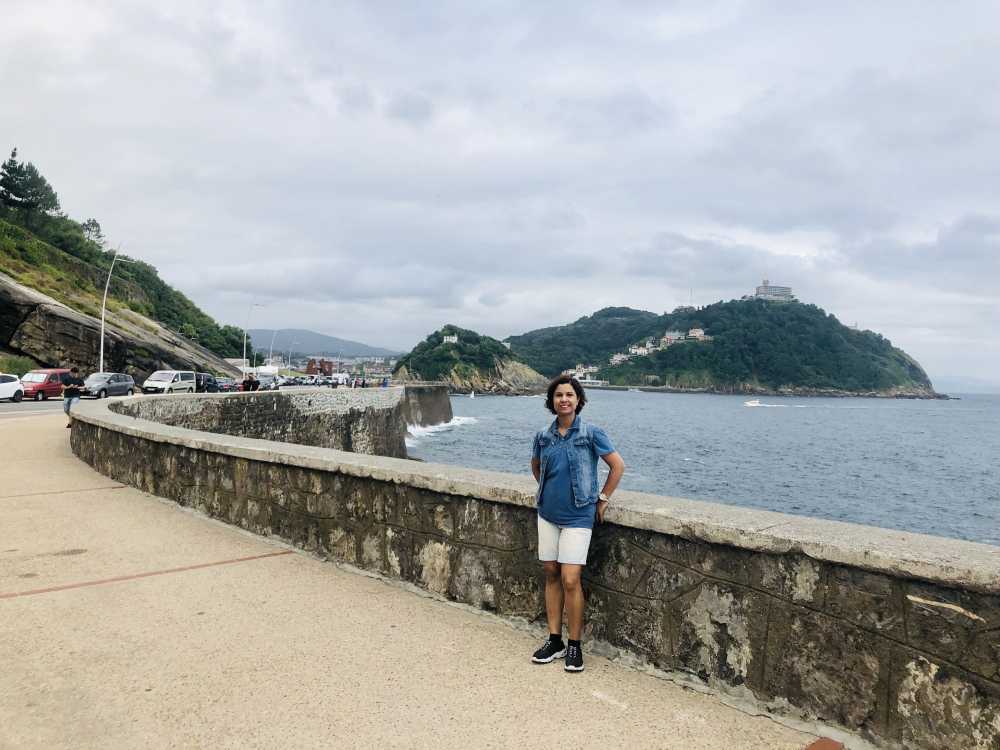 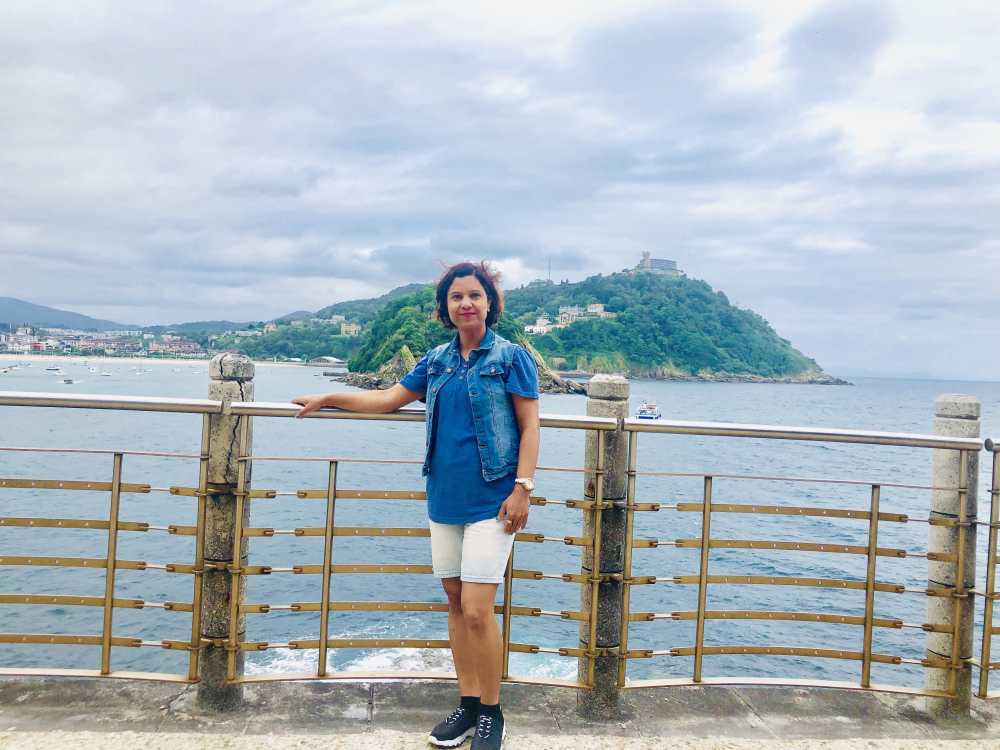 Our drive to the destination was now only 83 km through tunnels, mountains, and green fields. The clouds had become nimbus and started pouring. It had become cold and windy, we took out our jackets and rain gears and stopped for coffee. The grass looked greener with the drops of rain, it was foggy and drizzling at the same time, we didnt resist and took a few selfies. A hot cup of coffee did its trick and we left to drive further. 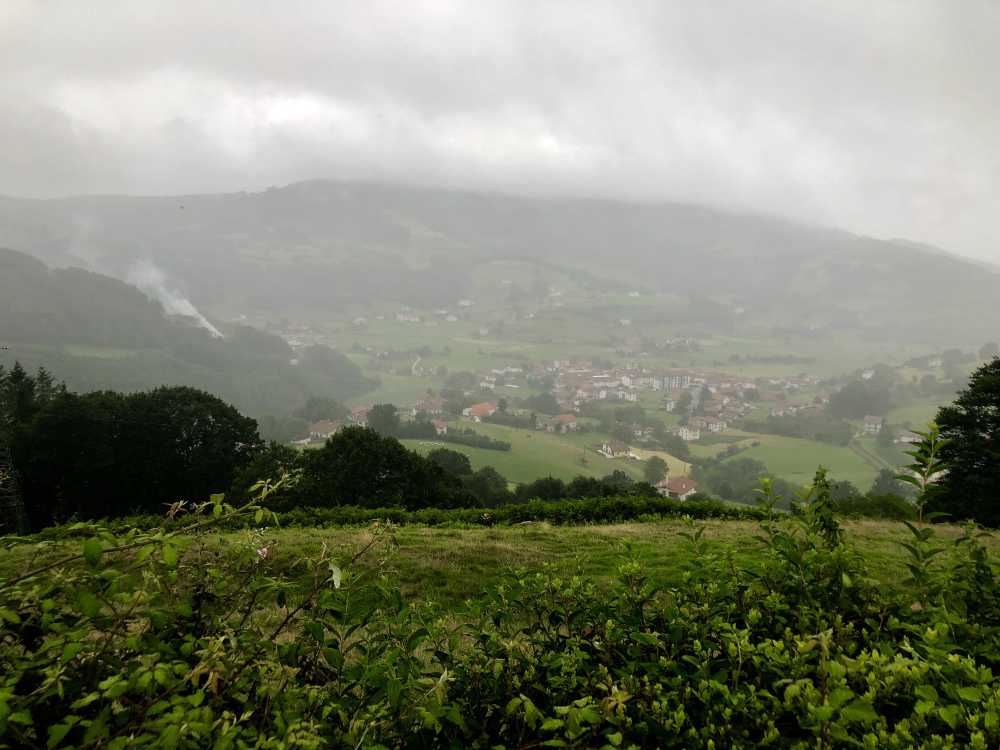 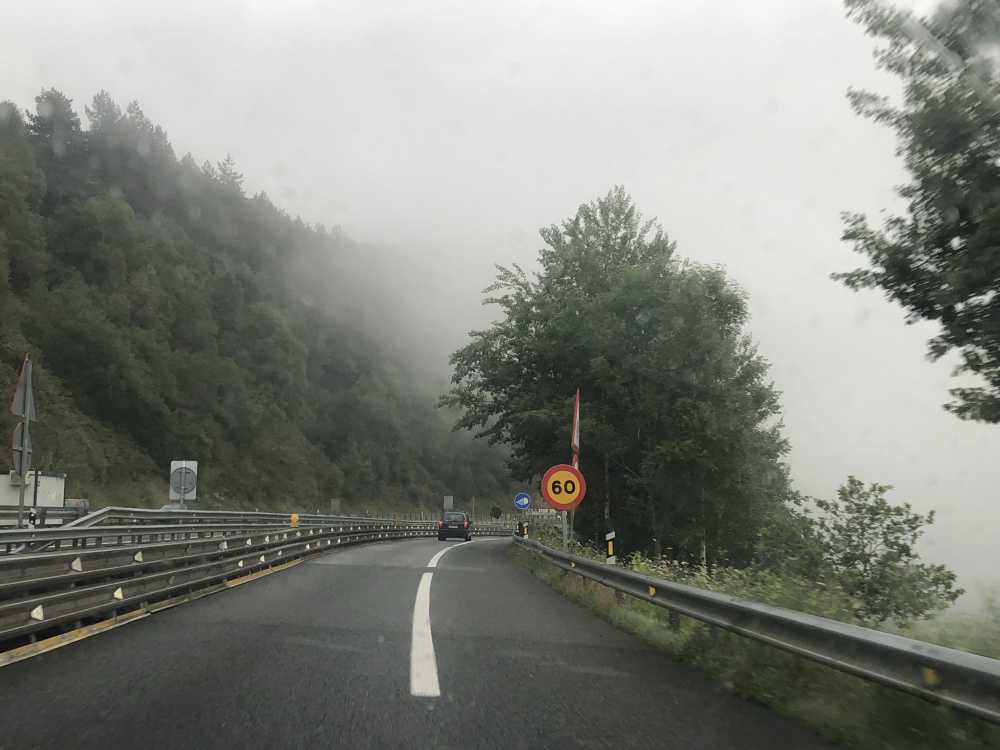 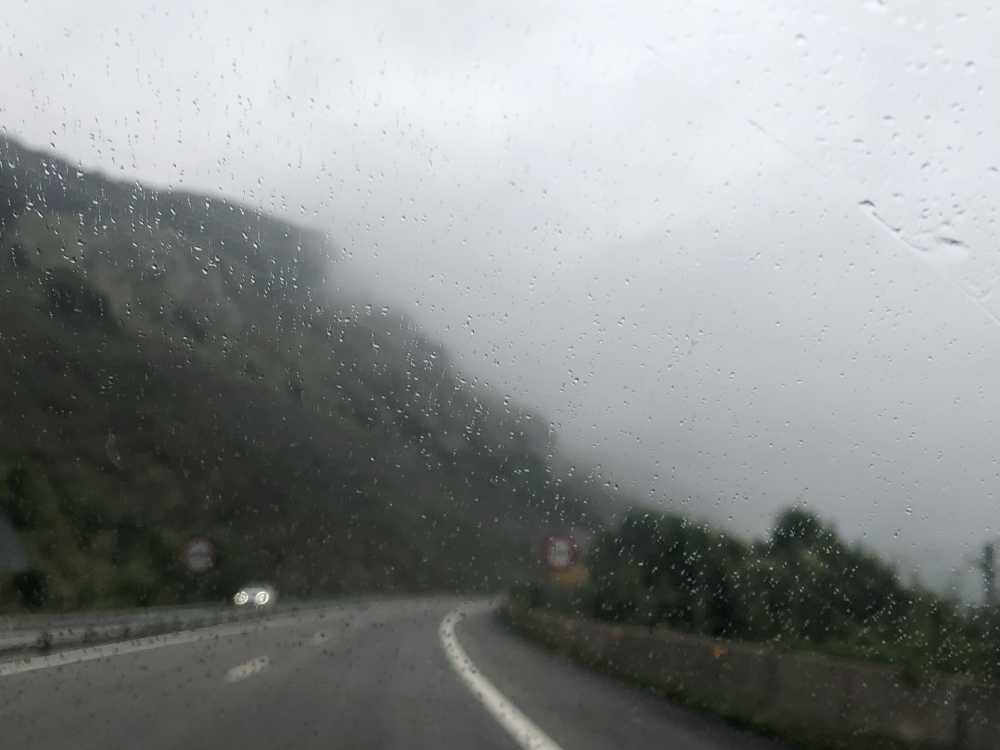 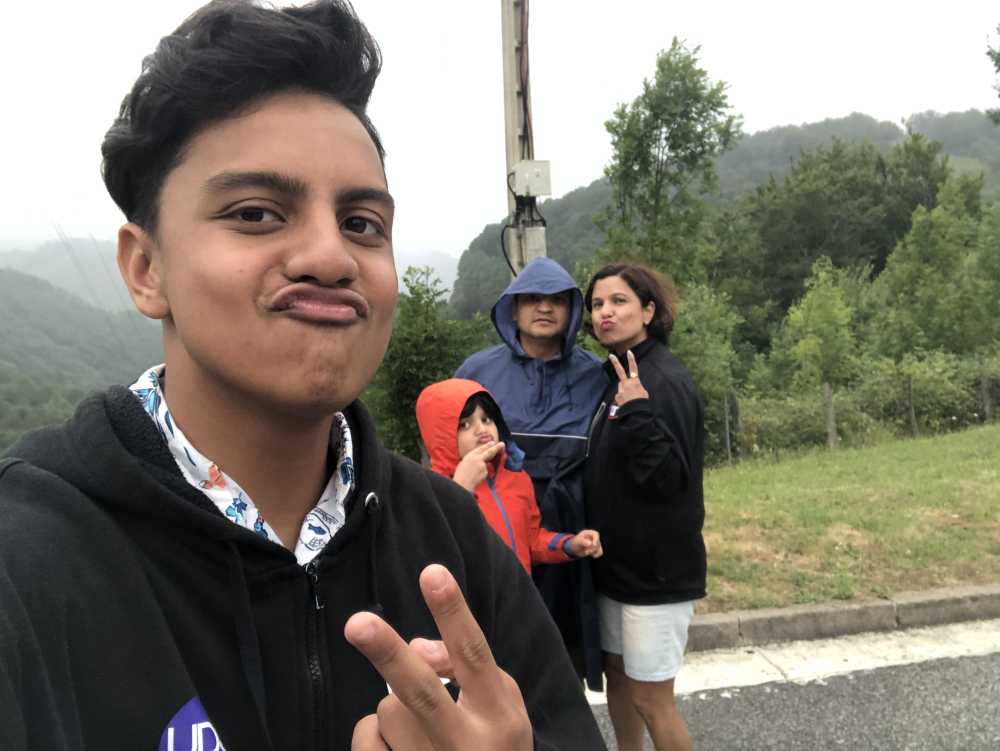 By the time we were near Pamplona, the black clouds were far away, the green mountains had become barren again. We had left the Spanish Basque Country behind; I wish we had planned to stay there a bit longer while we were in Spain. We reached Pamplona, parked the car, and headed to our apartment. This apartment was also centrally located, by the time we reached it was almost sunset (around 8pm). The apartment was spacious, one-bedroom hall with everything included, even a PS4 for kids but the biggest downfall, it was on the 5thfloor and there was no lift,We carried our luggage all the way up to the apartment, it had a balcony which opened to the streets. All the major attractions were within walking distance.

It was a bit cold in Pamplona, we covered up and left to explore the city. Compared to Madrid, the nightlife in Pamplona didnt attract as such. There was a night club close by where we could hang out, but I was too tired for that excursion. Pamplona is famous for the bull run. Bull run and bullfighting are the two ancient sports of Spain which are slowly dying in the other parts. We came here because the place was in the movie but there was no event at that time. There was a bullfighting rink nearby, but it closed by the time we reached. The shops were almost closed, hardly one or 2 opened. It felt kind of dead, there were a few people dining in the restaurants and some at the square, thats it. 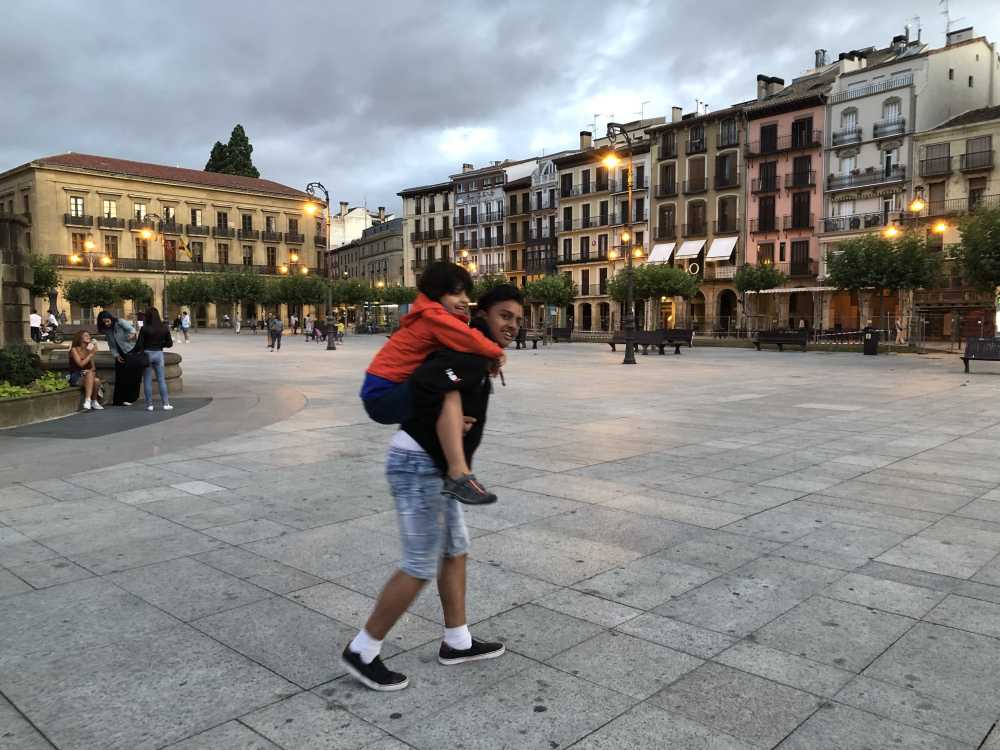 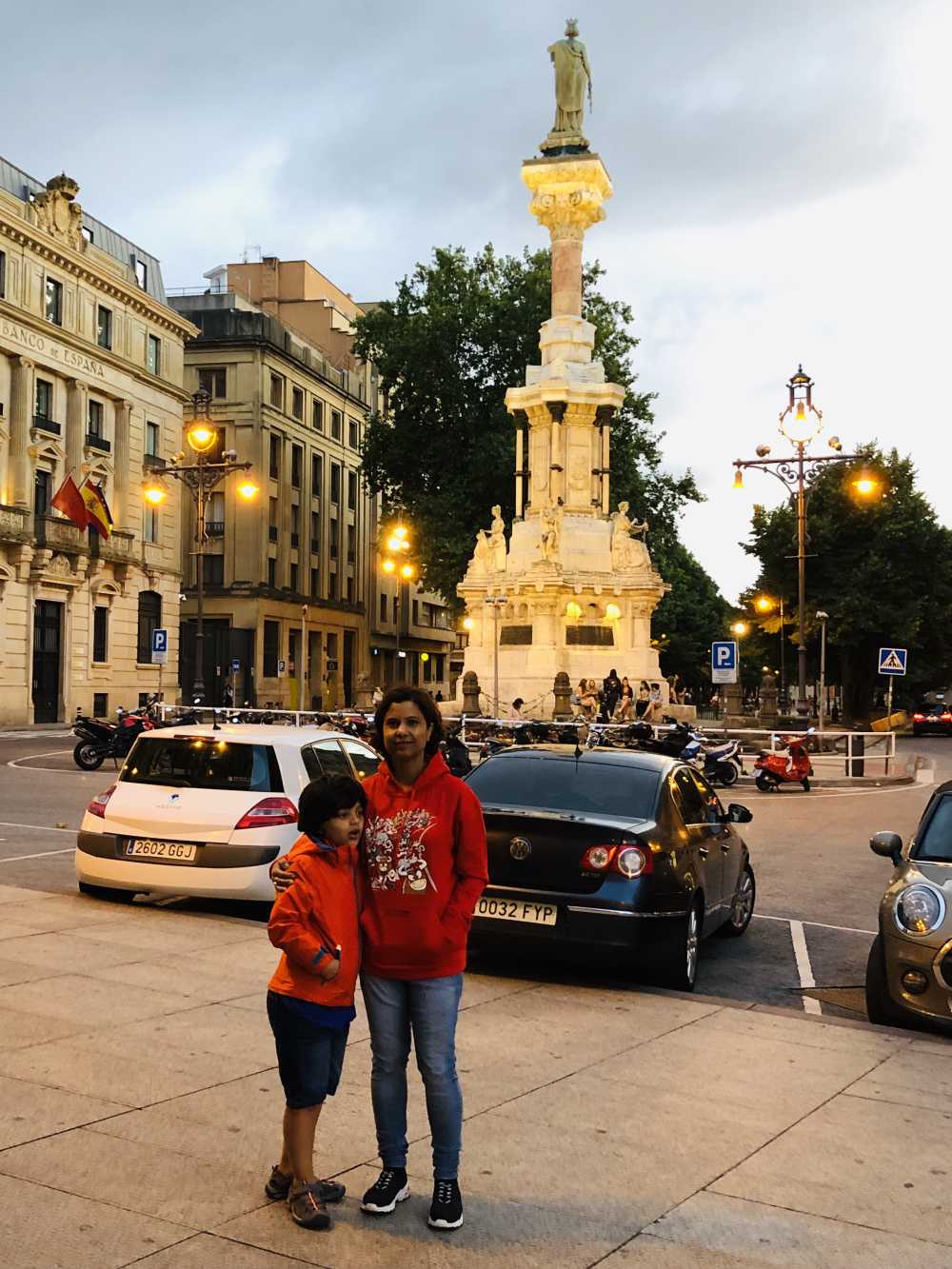 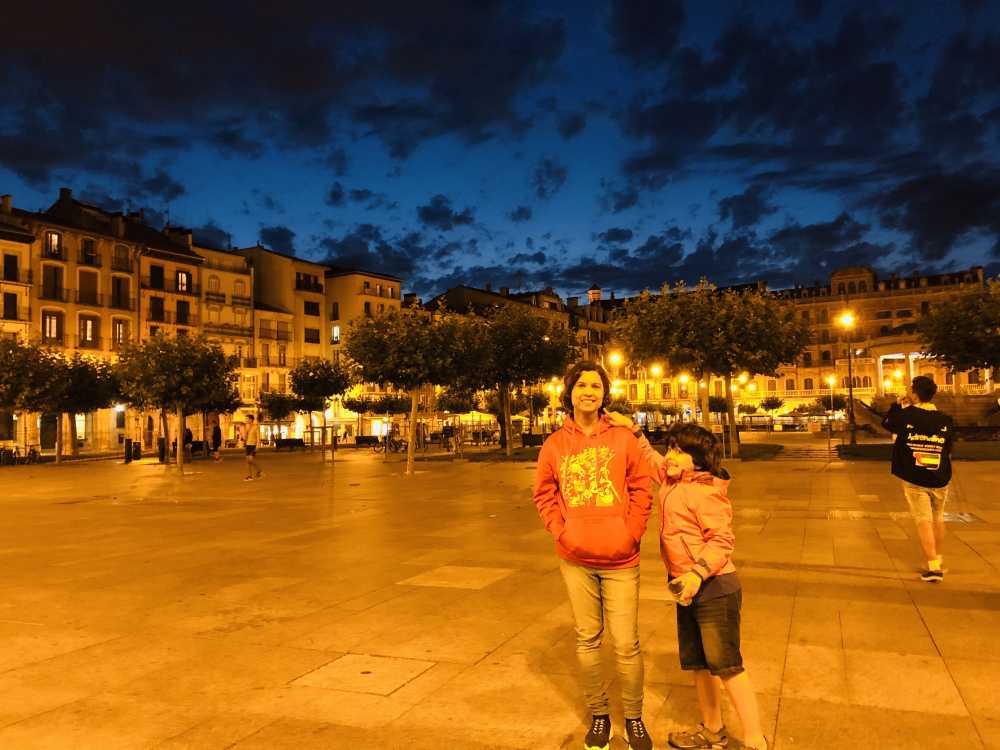 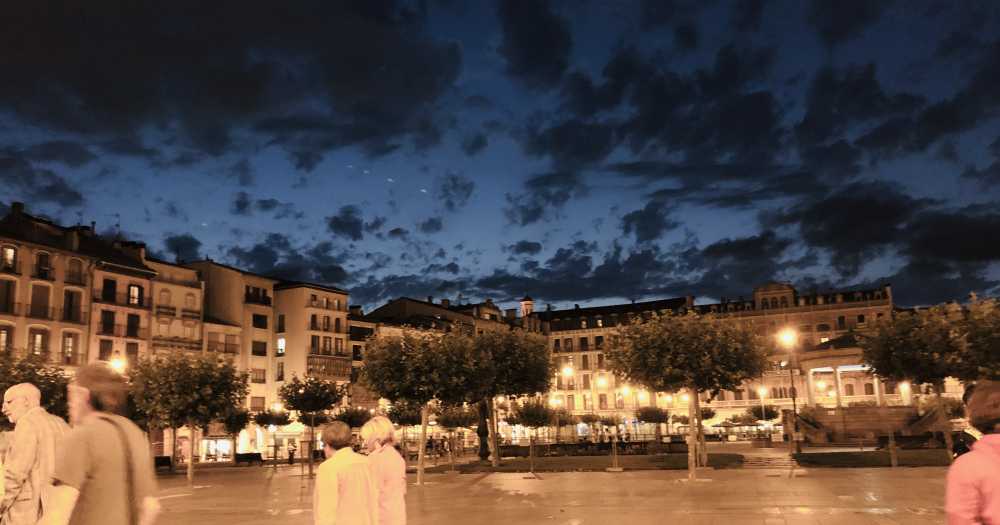 We were driving the whole day and Pamplona seriously didnt impress me at all after Madrid and San Sebastien. Kids were tired too, so we decided to cook a light meal at home and rest. We cooked and enjoyed the dinner on the balcony that night, going down 5 floors didnt excite me at all. Hubby chose to work, kids played video games while I surfed the internet for some time before hitting the bed. Frankly, we would recommend San Sebastien instead of Pamplona anytime unless there was a bull run event happening. That must be interesting, I have no idea about it.

Hope you experienced the Basque country and the drive to Pamplona with me, time to pen down for day-3. The next day, we drove to Barcelona. Until then, peace out!