A visit to Shirdi Dham and Shani Shingnapur this spring break!

“Om Sai Ram”! “Shraddha – Saburi” which means, “Keep faith in Him and have patience”.

Om Sai Ram! How many of you believe in Sai Baba of Shirdi? Ive heard people of all religions and faith bow down to Him and some visit the shrine every year. I have believed in Him always, but my husband is the bigger devotee of Sai Baba. He says, he feels a special connection with Baba. He loves the quote which inspires him, Shraddha Saburi which means, Keep faith in Him and have patience. He is there for all and will take care. My husband says, his life changed after Shirdi.

When I was in college, we used to drive to Sai Baba temple in Dehradun. After I got married, we moved to Kenya and stayed there for 4 years. I wanted to do something, but the place had limitations. We left Africa and moved to Dubai in 2007, I was visiting Dehradun and visited Sai Babas temple one day when my husband called me and said, I would now be able to work with him. He has spoken to the company and they are ok for me to sit and work in the same office in Dubai. I was thrilled, I had just stepped out of the temple. I never expected this, I wanted to work but this came out of nowhere. Since then, there was no stopping. Its been 12 years since I am working with my husband and we have grown from where we had started. 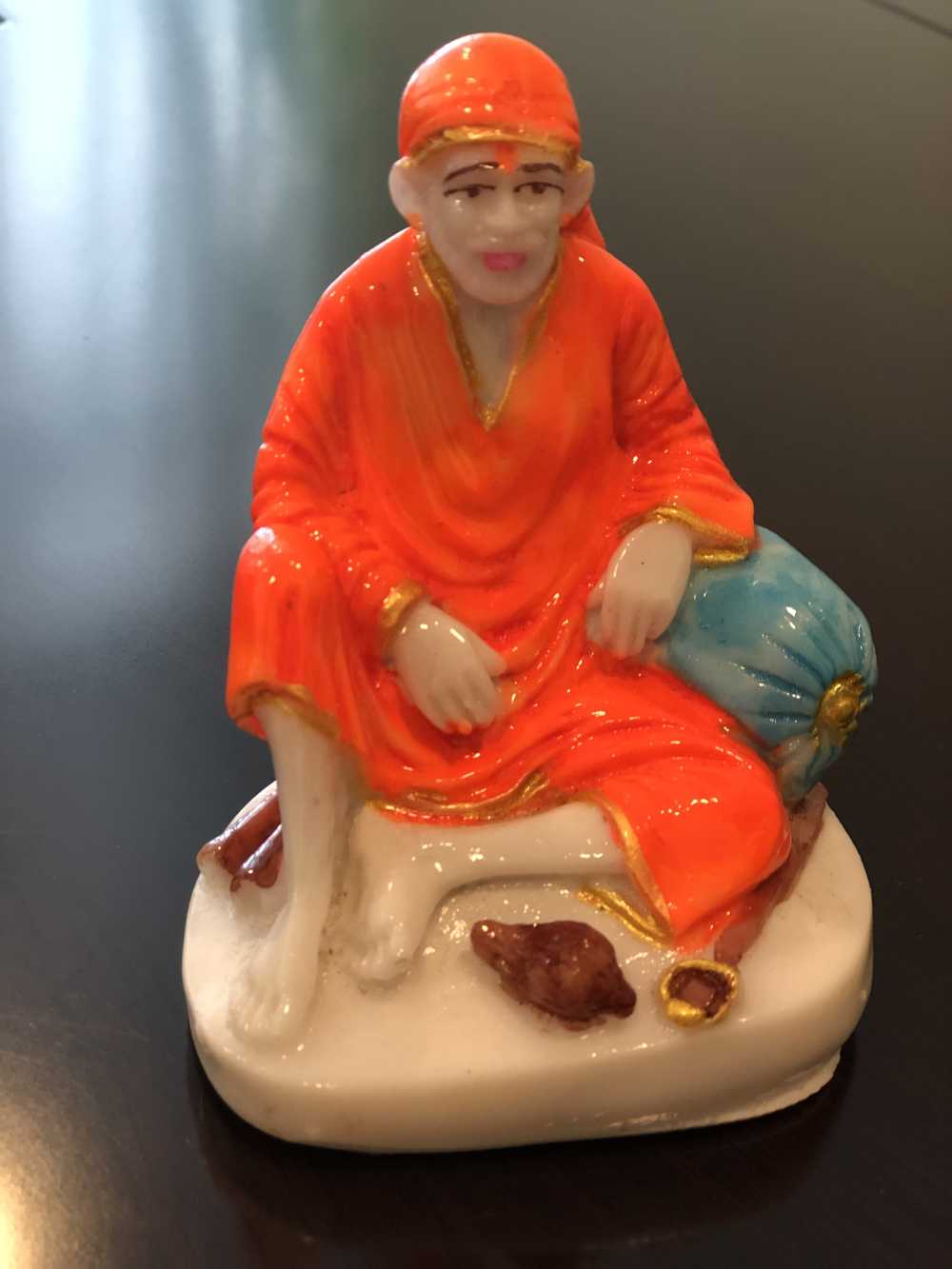 This year, after 20 years we went back to Shirdi with the whole family. He was very excited to take the kids along. We booked morning aarti online for Sunday though we reached Shirdi on Saturday morning. We thought of taking advantage and left for Shani Shingnapur, its one of the sacred places belongs to Lord Shani.

For the first time, we used sleeper buses to travel to Shirdi, I was in Baroda with my family and my husband was in Mumbai. We decided to meet in Shirdi, my brother and his wife were accompanying us. We checked all the means of transport, there were no direct trains or flights from Baroda to Shirdi. We could hire a taxi but that would have been a 12-13-hour ride on Indian roads. I had my boys with me who have only traveled on flights before, we prefer trains for local travel. Taxis are uncomfortable for a long drive even if you hire a large SUV. So, we researched the Tour buses a lot, my brother was checking from Germany, I was in Dubai, we read reviews and checked with friends. Finally, we decided we will use the sleeper bus this time as it started late at night so they could all finish their office work on Friday. We wanted to take advantage of the weekend.

We choseNeeta Tours and Travelsfor the ride, we left Baroda at around 11:30 pm Baroda, the bus was actually more than an hour late. Husband started earlier and reached Shirdi earlier. We were told to carry bedsheets for the bus as they wouldnt provide anything to cover and the a/c is quite high at night. It was good we did, since it was almost midnight the kids slept immediately. They had a double bed/ queen size kind of space where I and the little one could sleep comfortably. You can choose single or double seats. Bathrooms are a challenge as there is nothing on the bus. They stop somewhere on the way; I woke up in midnight to use the loo, but it was so dirty. We reached Shirdi around 9:30 am, the husband had reached the hotel then, the ride from Mumbai was closer and faster. The roads are bumpy though, so better to avoid a heavy meal before traveling. 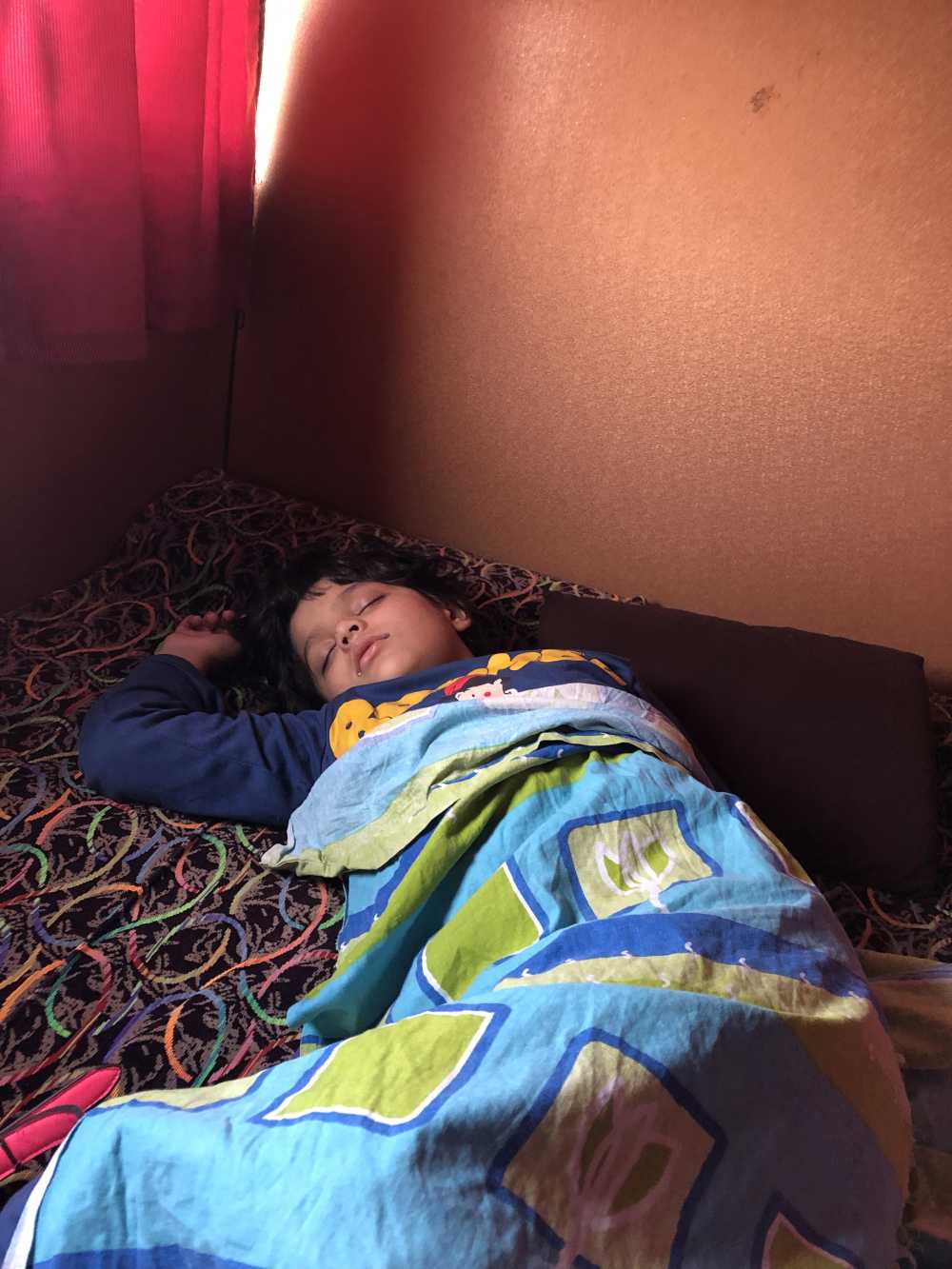 Where to stay: We chose Pushpak Resort in Shirdi, it looked good on the internet. The hotel was clean, spacious rooms and enough space for the family of 4 to fit in. Not very expensive compared to the other hotels in the area. There is a swimming pool to enjoy if you have time, our little one played there for a while and even made friends. You can easily get autos and taxis outside the hotel. The Samadhi temple is around 1.2 km from the hotel. There are restaurants in the area, so food is not a problem, the hotel also has a nice restaurant. They were kind enough to give us early Check-in, we checked in the room, showered, and rested for a while. We had booked a taxi from the hotel to Shani Shignapur which is around a 2-and-a-half-hour drive from the hotel.

For more information on the hotel, visithttps://www.hotelpushpakresort.com/

Shani Shingnapur: The drive to the temple had a bumpy road, there is a stretch of 21kms that is being rebuilt, expect bumps on the road. The roadside eateries look good. Its said that no one locks their doors in the city coz of the fright of Lord Shani. Its a peaceful area where thousands of people visit on a daily basis. It was a Saturday, the day of Lord Shanidev so there were huge crowds. Lord Shani refers to the planet Saturn and is one of the nine heavenly objects known as Navgraha in Hindu Astrology. Shani is also a male deity in the Puranas, whose iconography consists of a handsome figure carrying a sword or danda (scepter) and sitting on a crow. He is a God of Justice in Hindu mythology and he gives benefits to all, depending upon their deeds (karma). 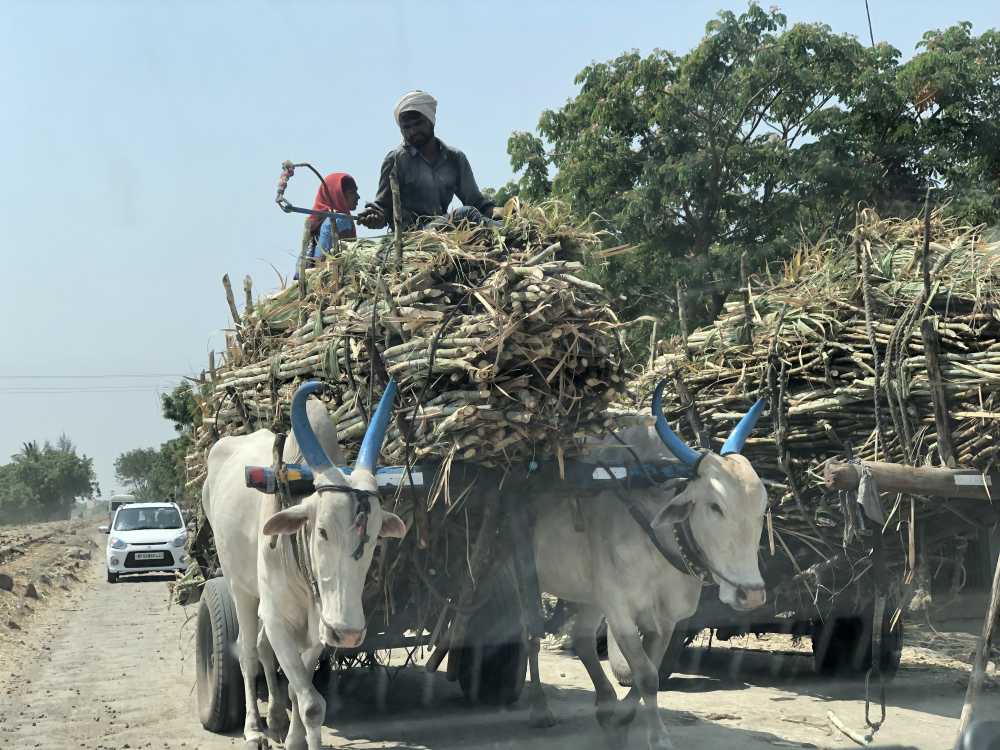 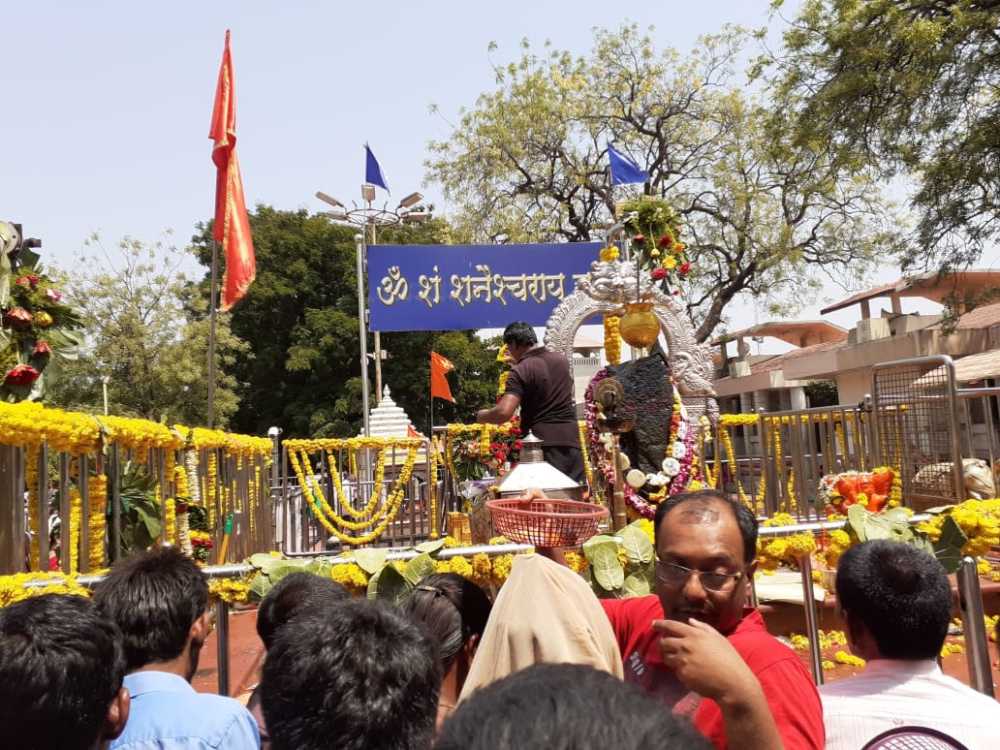 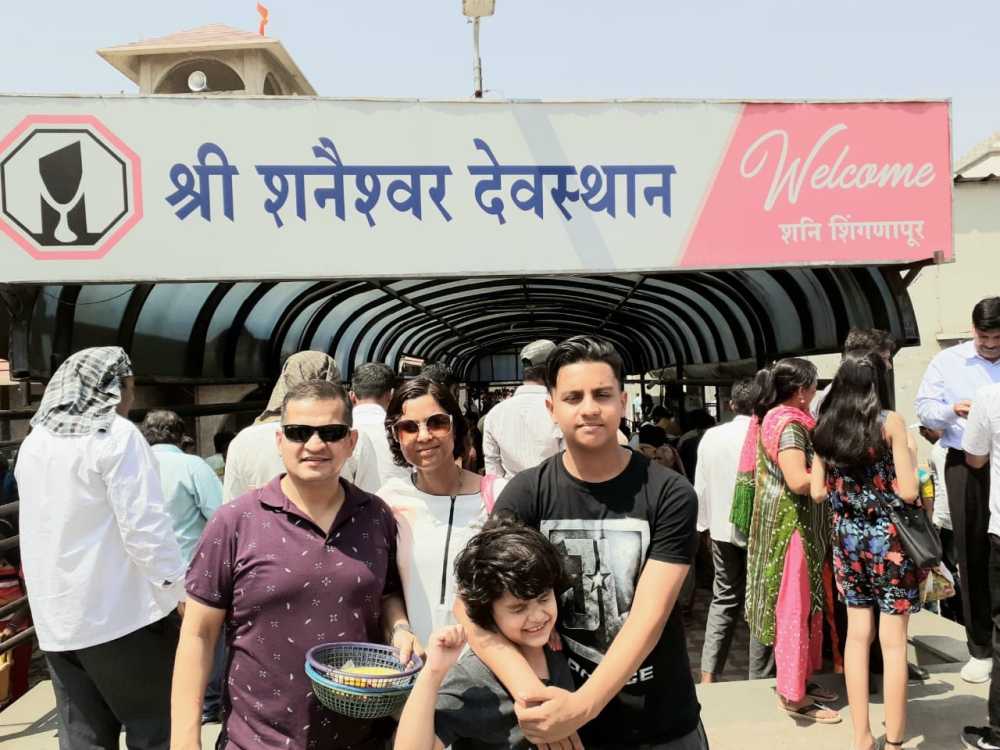 After the darshan, we drove back to Shirdi and checked back in the hotel, and rested. It had been a long night drive from Baroda to Shirdi and another 5 plus hour drive to Shani temple and back. In the evening, we visited the Samadhi area, it was a weekend so there were huge lineups for darshan. We had booked aarti for Sunday morning, we had dinner at a nearby restaurant and came back to the room.

Samadhi Mandir: It was an exciting day as we were finally going to visit the temple of Sai Baba. Sai Baba is worshipped by people of all religions. We left for the temple well in advance without eating anything as in our culture, we should only be eating after the darshan. There were different gates and lineups for people who had booked Arti. We were then told to wait in the hall, it was so systematic as they were putting chairs for people by the time, they had arrived so the ones who reached first could be the first to go inside. We all sat down and waited for the turn. While entering, we met a person who said we leave our shoes outside his shop. He kept following us, so we couldnt say anything and decided to buy prasad from him. He actually sold us prasad for 650 Rs and another one 450 Rs, it was our choice though, but we could have just bought a flower to offer Sai Baba. My husband felt we were fooled by him, the priests would only offer flowers to Sai Baba and removes the rest, and puts it aside. 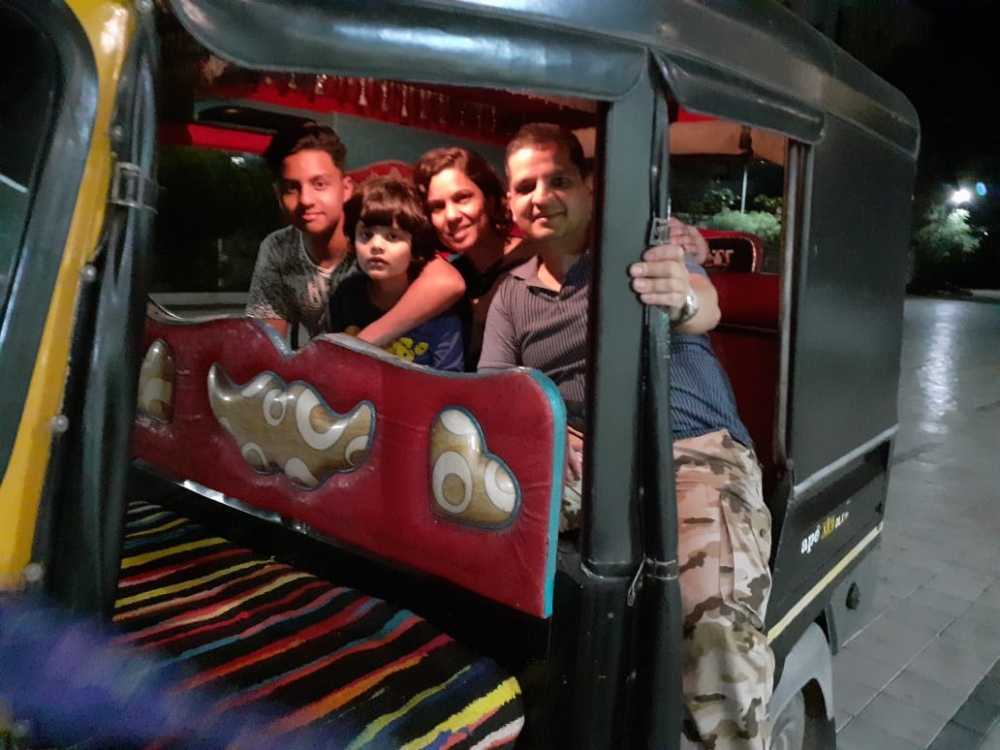 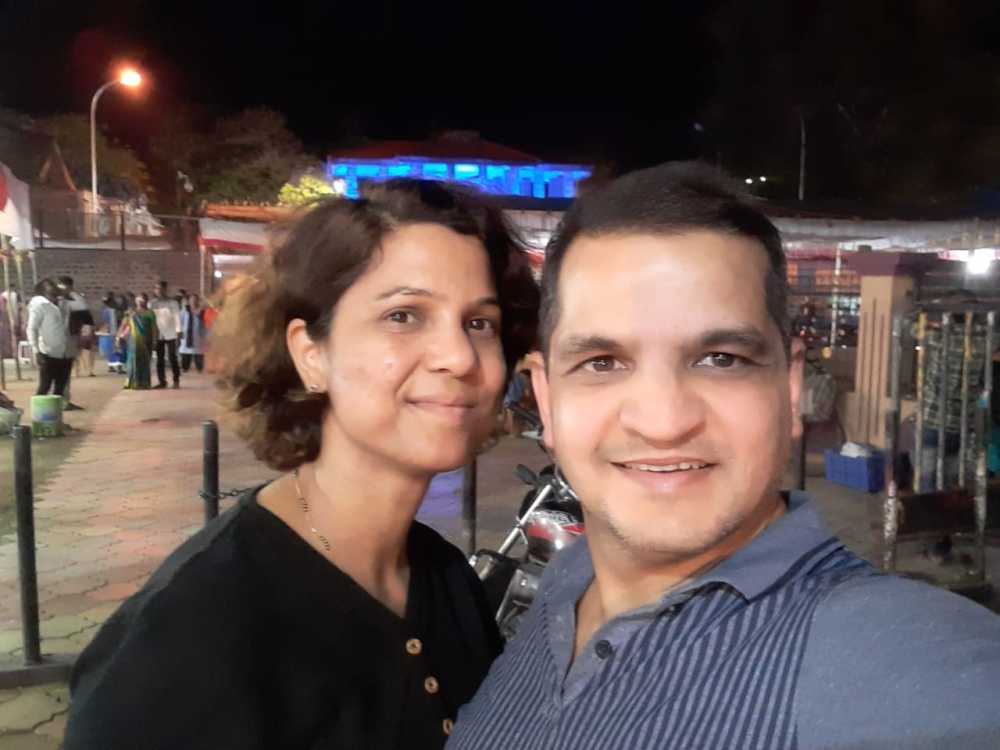 I thought, by buying it from him we actually helped him run his small store, and then it was totally our choice, if we wanted, we wouldnt have fallen for it. Its totally your choice to buy prasad and offer to the Lord or just buy a small token and with the rest of the money feed the poor in the area. There are restaurants where you buy meals and distribute them to the needy. I would also do it next time.

Inside the temple, there were huge lineups, my husband couldnt have the proper sight and didnt feel good about it while I was right in front of the Idol and looked at Him the whole time we were standing in the line. It was so peaceful and blissful. There are people who visit every year.

There were a lot of people visiting from South India as well. The devotion cannot be beaten by anything else. There was a lady who looked like she had survived critical illness had visited the temple with a lot of presents for Baba. It looked like they had asked for something which has been heard by the supreme powers, so she came there to express the gratitude. There were people of all ages and different parts of India. People from all over the world just like us, visit the shrine to get a glimpse of Baba. They say, He protects his people from all the negatives in life and guides them on their journey!

It was a great experience, we stayed back in the hotel as it was too hot outside to walk around during the day. We walked again to the Samadhi area again in the evening and left Shirdi on the same night! My wish of visiting Shirdi Sai Baba temple is granted, I hope to visit there again in the future. Last spring in 2018, we visited Vaishno Devi temple along with the other sacred temple in Katra and Jammu, and in 2019 we have done Shirdi, lets see where it would be next! May God bless you all!