Edinburgh Castle is believed to be the most haunted place in Edinburgh, it has had its fair share of death, battles, torture, and executions over the years. Along with the city sightseeing tours during the day, there are so many ghost tours organized by companies at night and some mighty explorers are always on the hunt. I was way more scared and came back to the room early, though hubby kept cribbing about walking with them at night.

Husband got a job in Scotland some 16 years ago, we had just got married and he was looking for new opportunities. He received many calls from a hotel company in Scotland that owned castles near the shores. They were even willing to offer me a job and hire us together as a couple. We researched online and found out the place was haunted and even Kate Winslet, from the movie Titanic, lives near the castle with a ghost. I just couldnt handle it and we declined the offer. Years later, we had a chance to visit Scotland last week to attend our eldest sons dance competition. 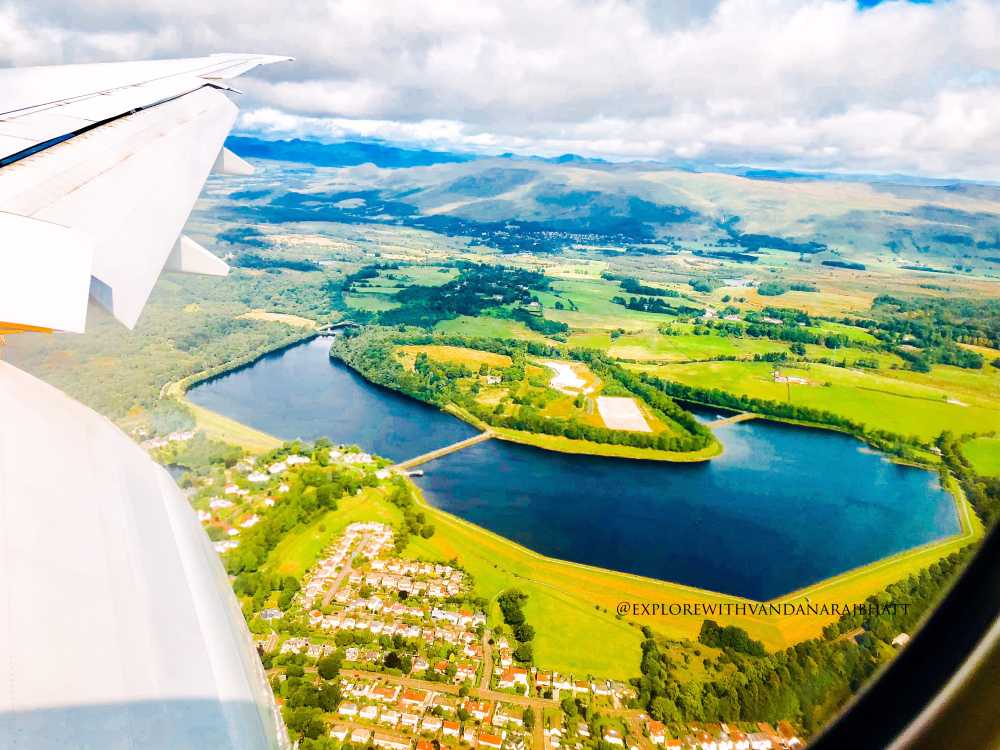 We landed at Glasgow Airport and the aerial views were magical. We had some time in hand before the competition, so we directly traveled to Edinburgh which is called to be a Historical Haven. We took a train from Glasgow Central Railway Station to Edinburgh its an hour journey. Phenomenal views on the way, the countryside, farm animals, and green mountains.

Our friends advised us to get on the hop on-hop off bus to experience the best in the city. Since we arrived in the latter half of the day, we didnt have much time to get down at each stop, but we finalized the best places for us and visited a few attractions. 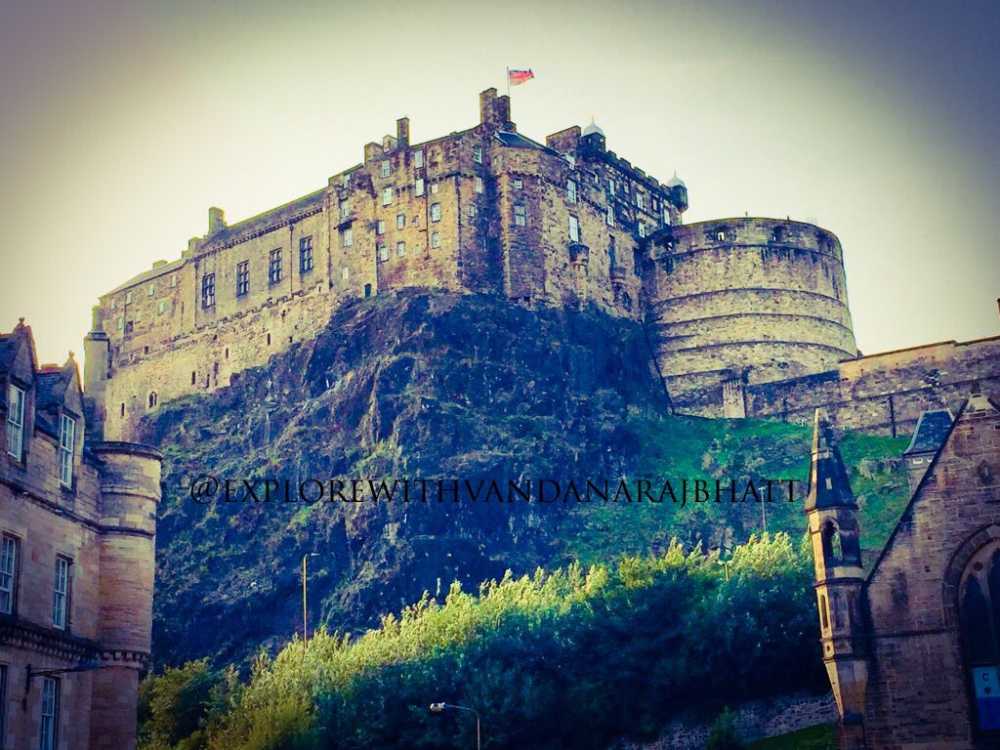 Edinburgh Castle is believed to be the most haunted place in Edinburgh, it has had its fair share of death, battles, torture, and executions over the years. Along with the city sightseeing tours during the day, there are so many ghost tours organized by companies at night and some mighty explorers are always on the hunt. I was way more scared and came back to the room early, though hubby kept cribbing about walking with them at night. I could hardly sleep the whole night and was sweating hard inside the quilt, I didnt see or feel anything but its just always in my heart. Im too scared in such places. 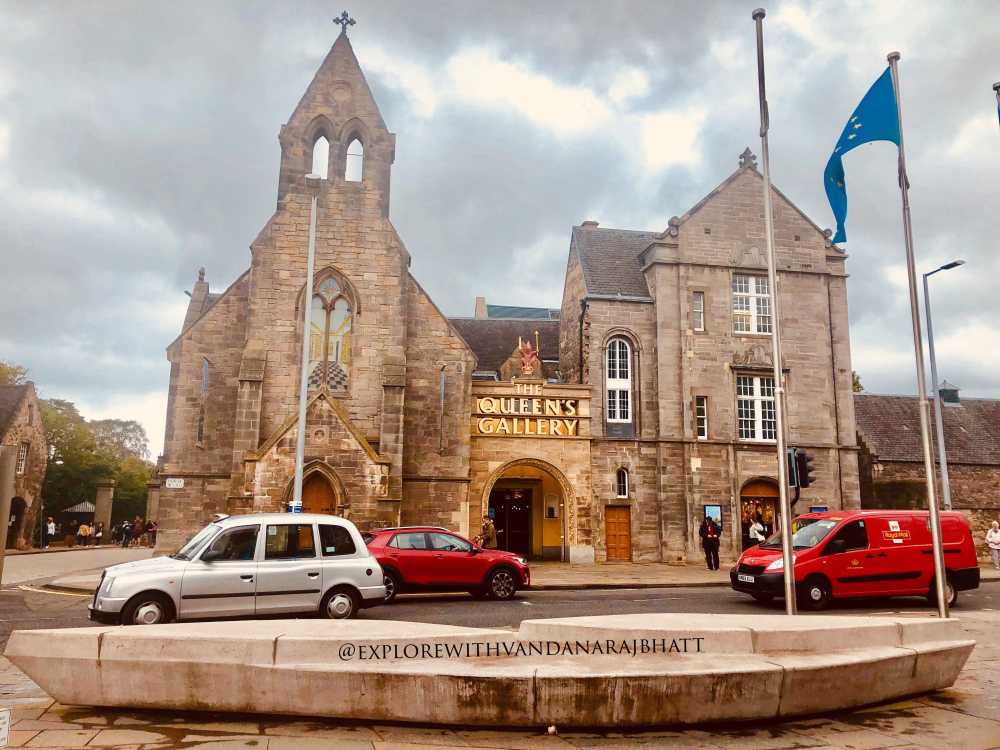 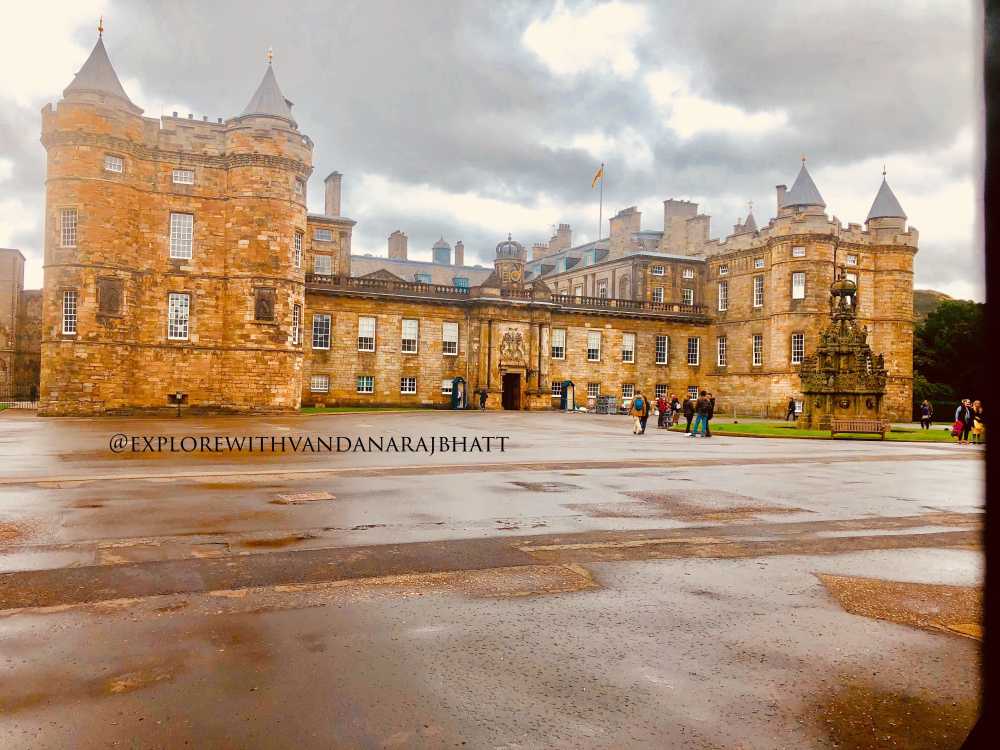 Archaeologists have established human occupation of the rock since at least the Iron Age (2nd century AD), although the nature of the early settlement is unclear. There has been a royal castle on the rock since at least the reign of David 1 in the 12th century. The castle stands upon the plug of an extinct volcano, which is estimated to have risen about 350 million years ago during the lower Carboniferous period.

Arthurs Seatis the main peak of the group of hills in Edinburgh, Scotland which form most of the Holyrood Park. The hill is easy to climb and since it is flat on top, it was once a popular destination for the Royal family to play tournaments. The hill is on an extinct volcano and was double in size, in the past the hill was filled with trees and was home to animals like deer. Later, during the developmental era, contractors broke the mountain and most of the rocks were used in making pavements in London. Its a similar rock to Edinburgh Castle. 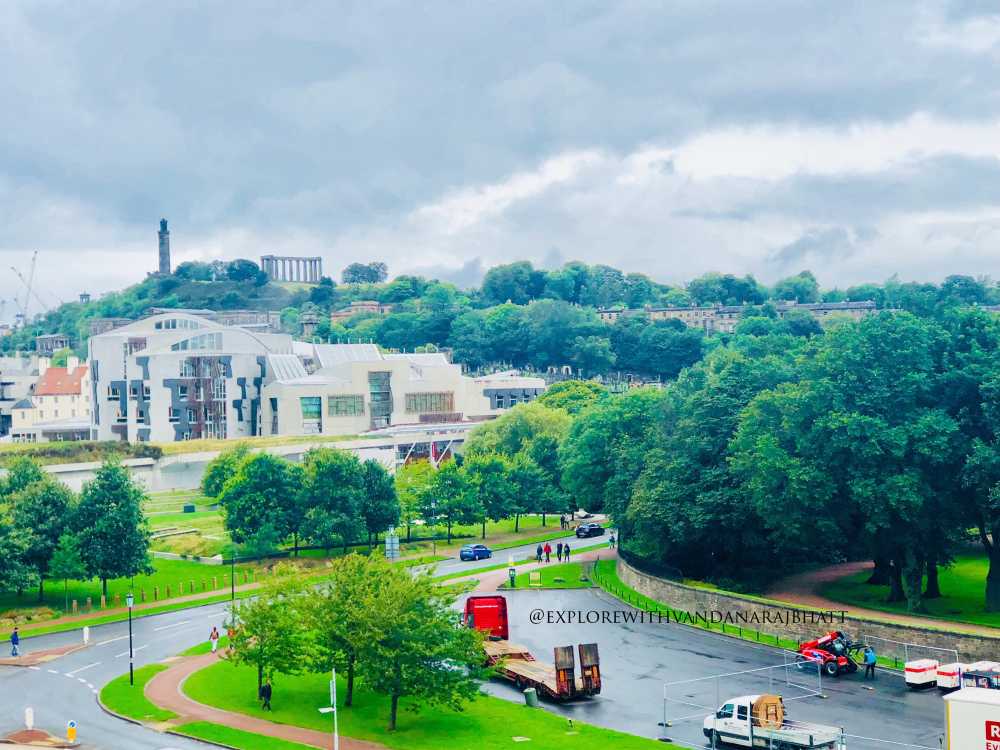 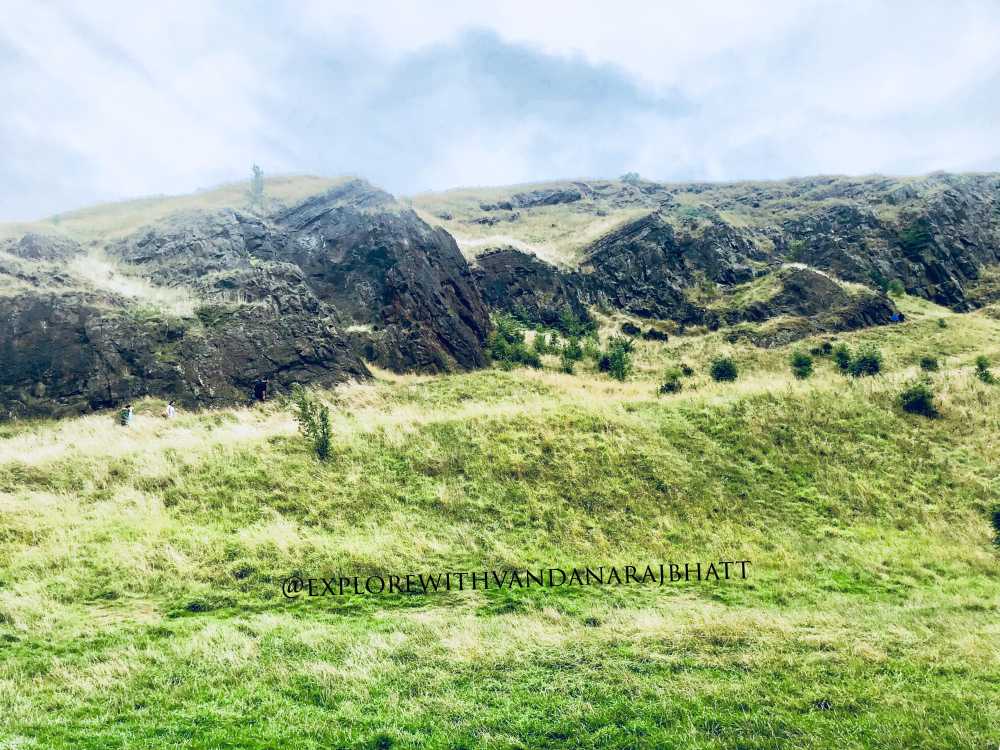 The slopes of the hill facing Holyrood are where young girls in Edinburgh traditionally bathe their faces in the dew on May Day to make themselves more beautiful. The panoramic city views from the top of the mountain are magnificent.

We visited a children's museum, which had a collection of toys, books, clothes, and accessories from different generations. Starting from the 60s, it gave a glimpse of how childhood and parenting have changed over the years.

Princess Square is the busiest area in Edinburgh along with the Waverly bridge. Edinburgh Fringe is another popular summer attraction. Most of the castles in the city have renovated and revamped themselves in 5-star luxury hotels.

Our Hotel Choice-For our stay in Edinburgh, we chose Old Town Chambers serviced apartments. They are recently renovated and in the center of the town, steps from Edinburgh train station and very close to Princess Square and Edinburgh Castle. The rooms were spacious, the bathroom was spotless, the toiletries were branded, and the best part was the city view from our balcony facing the Waverly bridge and the big wheel. 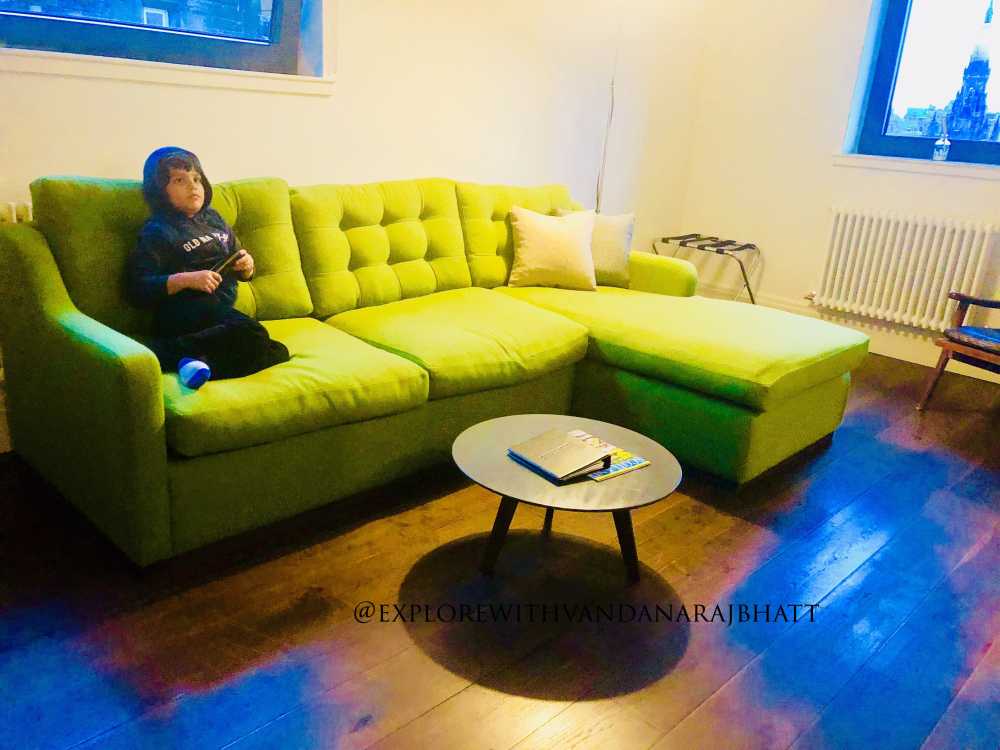 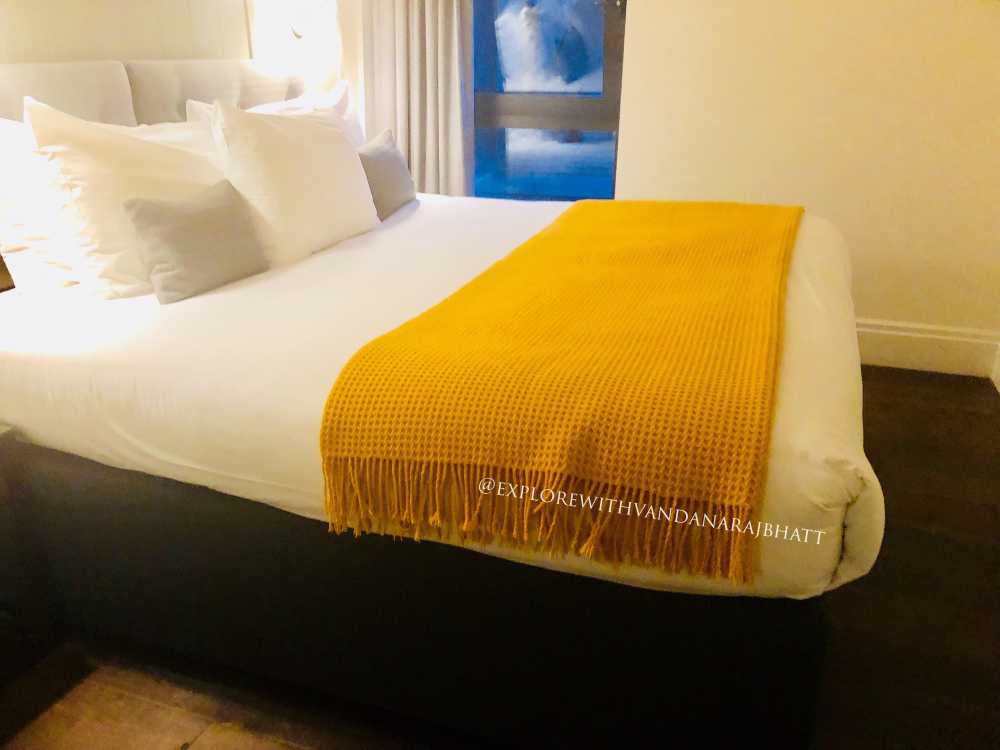 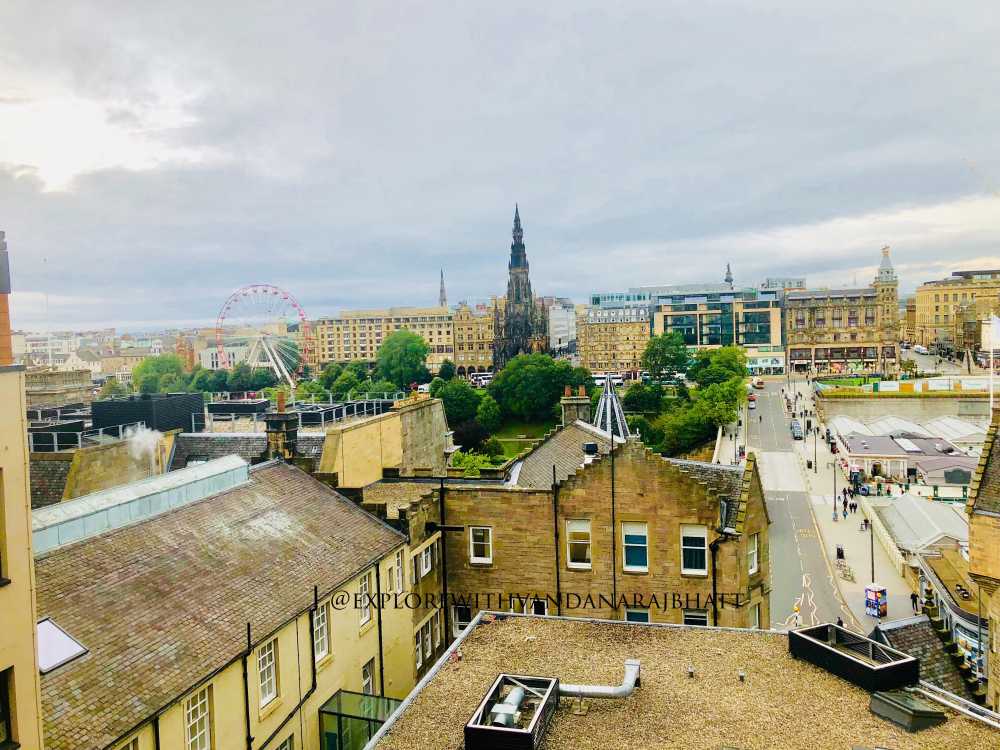 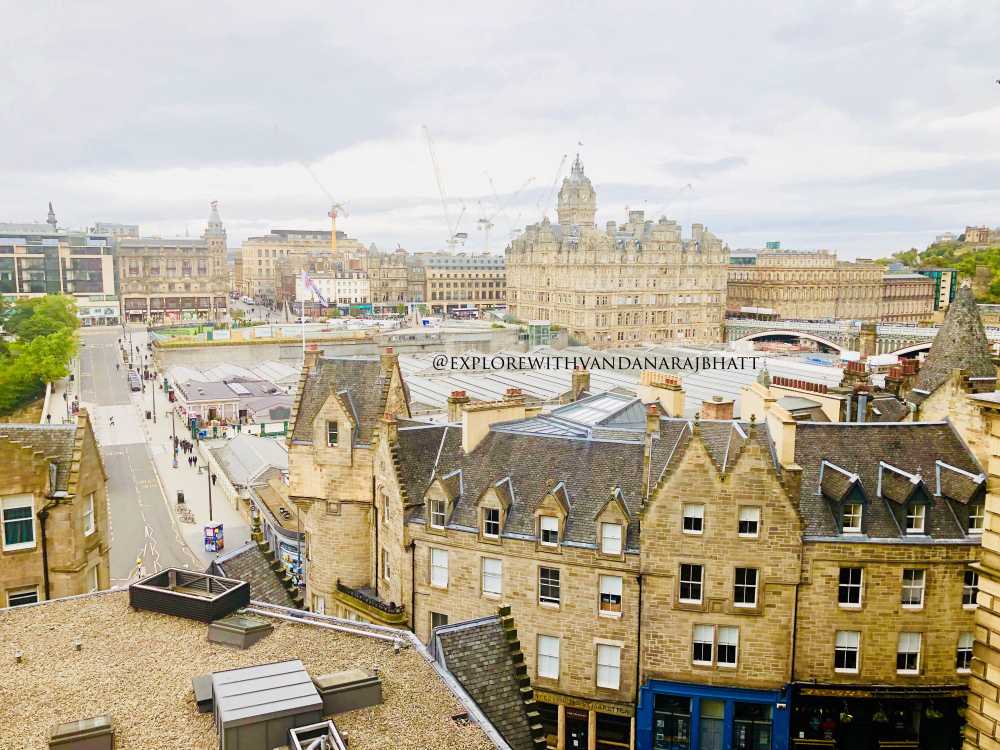 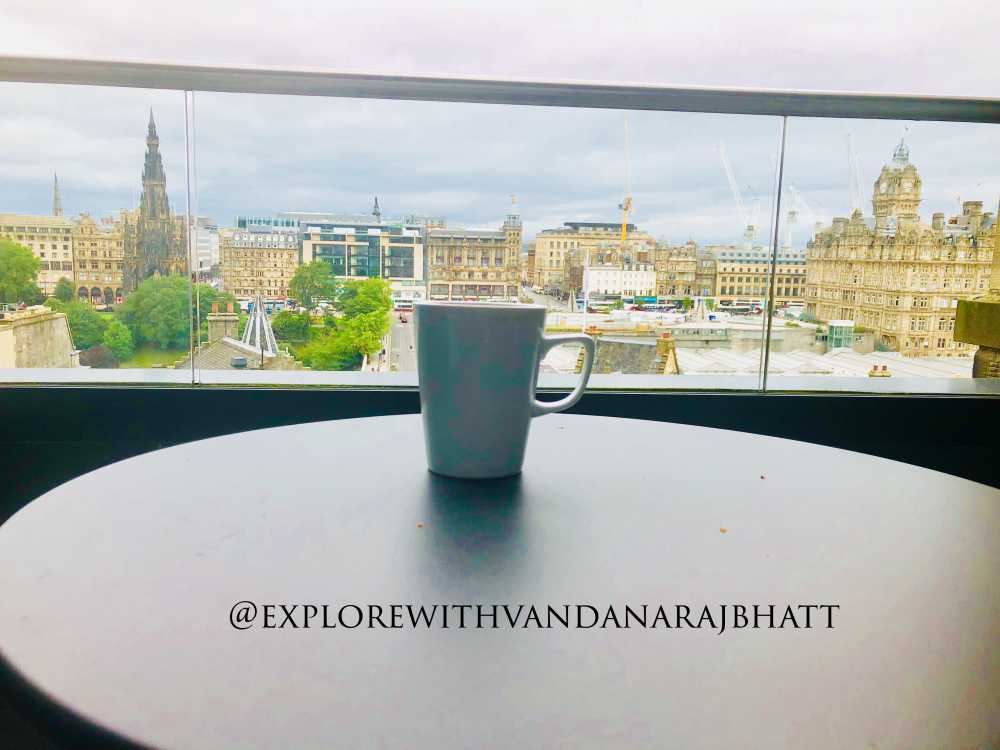 The apartment was huge with a dining room, a TV room, a large bedroom, and a bathroom along with a small kitchenette with utensils, dishwasher, pots, cutleries, microwave, and electric kettle. There were a washing machine, ironing board, and hairdryer.

We received some complimentary drinks on arrival. There was outdoor furniture to enjoy morning coffee with the view. The hotel staff was kind and informative.

For the bus tours: We chose the City Sightseeing Bus company, they stop at 14 different attractions and the bus service from every stop is in every 10 minutes, very convenient.

Food Joint: There are various restaurants and bars to dine in the city, you can even find Indian restaurants. But I was amazed to see a Scottish guy selling fritters in his small restaurant. We wanted to try something different for a snack and stopped for a stuffed potato. The recipe was interesting with different fillings, we chose the vegan filling. My eye caught fritters and I asked him what is that? He was like, its Pakoda. We busted into laughs to see a shop selling Pakodas in Scotland. Wish they also sold masala tea.

Edinburgh is for explorers who want to learn about history, science and even for adventurers who seek paranormal activities.