Should Canadians be excited if Donald Trump wins the race to the White House?

Donald Trump is the Chairman and President of Trump Organization, with the excellence in real estate, sports and entertainment. I heard him in an interview saying, “My father gave me a small loan of a few million dollars to start my own business”, wow!!!!

America is the largest economy in the world. Stock market in America crashed in late 2008 and it didnt only break the banks in the United States but lead in global financial crises. Everyone was affected from the crises and it resulted in bankruptcies, closing companies and jobs cuts worldwide. America needs a much stronger leader after current President Barack Obama exits White House. You mustve seen a funny picture circulating on social media with the tagline saying, Ten Years ago America got a black President and this time were getting an orange President. Well, jokes apart! As a Canadian how happy and excited will you be if Donald Trump continues leading the US election campaign and actually becomes the President of United States of America? Trump seems to be having a big fan following, that is helping him to win many states in spite of his racial and anti-Muslim attitude. 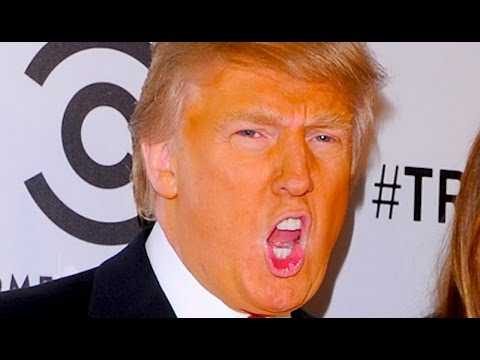 Donald Trump is the Chairman and President of Trump Organization, with the excellence in real estate, sports and entertainment. I heard him in an interview saying, My father gave me a small loan of a few million dollars to start my own business, wow!!!! Small loan of only million dollars!!! Hes filthy rich and a big spender as well. He has announced bankruptcies 3 times in his career. Trump started his business career in his fathers office and cracked a few valuable deals which made him more confident for business. Trump owns miscellaneous prestigious address in New York City and around the world. Trump is an American billionaire who owns a lot of businesses in the US and around the world but why do people trust him so much? Why do they want him to win? Is it because hes a successful businessman?? But can he prove to be a successful leader? Well, his supporters might know why, J

The race to White House is believed to be brutal; Hillary Clinton (Democratic Party), w/o Ex- President Bill Clinton will be facing Donald Trump (Republican Party) in the biggest election of the world on November 8, 2016. When it comes to final Presidential race, the Democrat and Republic candidates will have to go head to head to win the 50 American states. Trump has already won 30 states of the total 42 primaries. Ted Cruz and some other candidates have already suspended their campaign. Ted Cruz was born in Calgary, Canada; it wouldve been nice see him become the President of the United States, J

If Trump wins the elections and becomes the new President of United States, how will we (Canadians) be affected?? After Trumps win on Super-Tuesday last March, there was 100% search on Google with the Tagline, Migrating from the US to Canada. There are some people who support Trump but this data shows there are many more who oppose his Presidency. The relationship with between the current President and Barack Obama are very sound but Trump doesnt seem to have liked the policies Trudeau has introduced, including the gender equality in Canadian parliament.

Although Trump says, he loves Canada but also agrees that North America Free-Trade Agreement (NAFTA) is nonsense and he would like to renegotiate it if he becomes the next President. He also mentioned that hes not going to build walls on the borders but he may make entry in the US difficult than now with more security and new rules. He believes Syrian Refugees who arrived in Canada are big threat to the States. He will also stop Muslim Canadians to enter in the US. If Trump comes in the power, the cost of traveling to the US will increase as well as the goods supplied from the US will be more expensive and who would want to line for security check for hours?

A few months ago, there was a distress seen around the world, people went viral on social media condemning Trump, his name was even taken out from various buildings after he gave the statement to ban Muslims in the US. People worldwide were signing a petition to block his entrance in the UK. Some went with him and supported his action but most of the people were upset. Trump has also said about building a wall on US-Mexico border to stop entry of illegal immigrants. Trump has already alienated vast swaths of individuals; Mexicans, black Americans, Muslims and Women.

Since America is our neighbor, well want the best candidate to win, a candidate who will keep the similar relationship with Canada as we have now. Were proud of our country and multicultural environment. We would never want it to get hampered by anyone. We love our free entry and shopping in the States,

There is something about these US and Canadian Leaders..my favorite was Bill Clinton, I remember when he came to India as a President, he visited Rajasthan and danced among the local ladies and crowdhe was so involved and enjoyed himself..Justin Trudeau reminds me of him..he truly enjoys people and media,

Im not very fond of politics and not much into news channels but Im sure most of the Canadians are following it very closely including the kids in school. When I asked my 11years old in grade 6 if he knows anything about much awaited US Elections. He says, they see news in the school and he would want Hillary Clinton to win. The reason is funny from his perspective; back in March Hillary Clinton was on Jimmy Kimmels talk show and confirmed shell release the Secret UFO Files if shes elected as the next US President. Grade 6 and interest in space and aliens is natural,Let me know what are your views about the US elections and if Trump is your favorite candidate??

I would want Hillary Clinton to win as Ive liked Bill Clinton as a President in the past. Im sure, shell be able to play this role very well, she has been Foreign Minister with Barack Obama since last 10 years so she understands everything inside out. We will wait for the election results to come out on November 8th.